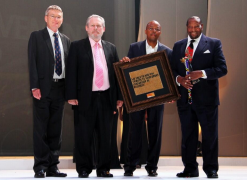 The Lifetime Achievement Award was presented by Minister Rob Davies to business mogul Richard Maponya, who is known for building a business empire despite the restrictions of apartheid. 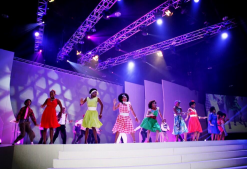 The best South African businesses in various sectors of the economy were showcased at the inaugural SA Premier Business Awards hosted by the Department of Trade and Industry (dti) on Wednesday night, 20 March 2013.

The awards were held in Sandton, Johannesburg in partnership with Proudly South African and Brand South Africa, with the aim of recognising South African companies that invest in human and technical resources in various projects and stimulate job creation.

“These awards are of value in particular because they give companies recognition and that recognition, we hope, passes on in some kind of tangible commercial reputational benefit can be significant for companies in enhancing their position in the market,” said Trade and Industry Minister Rob Davies in his opening address at the awards.

The top award for the evening was the Lifetime Achievement Award, which was presented by the minister. The award went to business mogul Richard Maponya who is known for building a business empire despite the restrictions of apartheid.

“This is a great honour,” Maponya said, also congratulating all the young people who received awards. “South Africa is making history.”

The winners, per category, were announced as follows:

“We are elated to receive this acknowledgement of nearly 30 years of contributing to rural development,” said Anthea Davids-Thames, executive director of Social Change Assistance Trust (Scat), which took home the Rural Development Award.

“We are proud as an organisation in terms of our contribution to our beloved country but more so proud of the communities we support,” she said. Scat is a veteran independent fund-raising and grant-making development agency based in Cape Town

The partners also thanked the Gordon Institute of Business Science (GIBS) and ABSA for their contribution to the awards.

Davies said the awards were an amalgamation of previous award ceremonies, and with such an award ceremony, South Africa can serve to encourage much more entrepreneurial efforts in the society as a whole.

Entry form submissions for the awards closed in mid-February. A total 159 entries were received while a 12 member judging panel comprising of various role players from business and labour as well as the department among others, were responsible for selecting the winners. The adjudication process concluded in March.

On 4 April dti will launch the fifth iteration of the Industrial Policy Action Plan (IPAP) which will outline government’s plans to industrialise the South African economy.

IPAP now falls under the New Growth Path which is an economic framework for 2010-2020, with the overriding objective of creating employment.