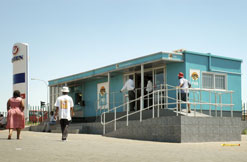 The number of South Africans with bank accounts has increased considerably, and according to economists this is good news for the banking sector and the economy in general.

Research conducted by TNS Research Surveys for advocacy group FinMark Trust reveals that the increase in bank account holders can mainly be attributed to the rollout of state grants to more than one in five South African adults. According to the report, Finscope 2008, about 55% of social grant recipients have opted to have funds deposited directly into their bank accounts.

Face-to-face interviews with 3 900 people across the country revealed that the proportion of people in the banking sector had risen to 63% from less than 50% four years ago. Nearly 50% of South African citizens in the Living Standards Measure (LSM) 1 to 5 category banked last year, up from 35% two years ago.

The South African Advertising Research Foundation’s LSM system is a widely used research tool, which divides the country’s population into 10 LSM groups – 1 being the lowest and 10 the highest.

“The effect of billions of rands in social grants entering private bank accounts is hugely beneficial,” said Andrew Pampallis, an economist in the Banking Unit of the University of Johannesburg Department of Economics.

He explained that even if the grant funds stay in bank accounts only overnight, it means that banks can lend more against that money.

“The relatively small amounts of, say R1 000, are irrelevant, but the multiple small amounts are relevant,” he explained. And as the funds are transferred from one account into another, for example as payments to clothing or grocery stores, in turn the money flows back into the economy.

ELS said banks have focused on attracting more people in the LSM 1 to 3 segments, through products such as the Mzansi savings account. This product was launched in 2004 by South Africa’s four major banks and PostBank to promote bank use among low-income people. The report also confirms this: of the banked population, 17.5% use an Mzansi account.

Entry-level products such as ATM cards and savings or transaction accounts are the most used, while cellphone banking is used by only 4% of the total population.

The report also showed that the number of borrowers is increasing. Last year the figure rose to 28% of the adult population (9.1-million people) from 13% the year before, with the wealthiest borrowing the most.

“It is important for people to enter the banking system and eventually move up and get involved in more specialised savings,” Els said.

But she warned that it is also crucial to manage the availability of credit, as some account holders are not able to afford the credit they are granted.