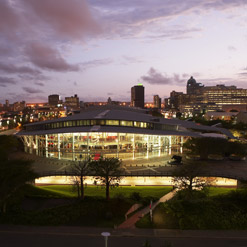 South Africa has always been popular with international leisure travellers, but it is also fast becoming a preferred business tourism destination. Large international companies are eager to host international events, conferences and trade expos in the country, and business travellers are as just as willing to attend.

The Department of Trade and Industry has identified business tourism – commonly referred to as the meetings, incentives, conferences and exhibitions (Mice) industry – as a niche tourism segment with growth potential.

Recent figures show that their expectations are accurate – in the first nine months of 2008 business travellers spent R2.4-billion in South Africa, 32% more than in the same period in 2007. Although the actual number of business travellers declined during this period, they are spending more.

According to former South African Tourism CEO Moeketsi Mosola, the average amount spent per business traveller rose from R760 per day in 2007 to R1 200 per day in 2008.

The global financial crisis has reduced international travel, and on a monthly basis the number of visitors from most markets declined in November – with the biggest fall in visitors from Asia (19.5%) and Europe (13.2%). The good news is that foreign visitors to South Africa increased by 5.1% to 8.6-million in the 11 months to November 2008.

Mosola said business tourism is more immune to the economic crisis than holiday tourism since professionals plan events long in advance – often two to three years ahead of time.

One of the reasons why South Africa is popular is that it is considered a value-for-money destination. Mudunwazi Baloyi, general manager for investment and trade facilitation at the Gauteng Economic Development Agency, said South Africa’s exchange rate makes it a relatively inexpensive destination.

“This makes it very attractive for business hosting events and for personal travel. It really counts in our favour,” Baloyi said.

There has also been a deliberate attempt to promote South Africa as a preferred destination for international events such as the Miss World Pageant and A1 Grand Prix.

“We want to present events and conferences with an international flavour as this draws more people,” he said.

Business tourism also has lucrative spinoffs for the leisure tourism industry. “When foreigners visit South Africa as conference delegates they get a taste of what South Africa is like and what it has to offer,” he said.

Business travellers often book tours to explore the region they are visiting, either before or after conferences. And many return to South Africa in subsequent years for holidays with friends and family – up to 40% of business travellers return to a destination within five years.

Interestingly, it appears that South Africa is also starting to give shopping destinations such as Dubai a run for its money. The 2006 Annual Tourism Report, compiled by the South African Tourism Strategic Research Unit, indicated that shopping was the most popular activity across all purposes of visit.

Wilson said certain provinces in South Africa would always be more popular for business travel. However, because business and leisure are often combined in one trip, other predominantly leisure-travel provinces also benefit from business visitors.

South Africa is also gaining recognition as a top Mice industry destination. According to the Gauteng Tourism Authority, the province first gained prominence as a conventions destination with the hosting of the 2002 World Summit on Sustainable Development. It is currently listed 35th by the International Congress and Convention Association, which ranks countries according to their ability to present international functions.

Wilson agreed that business tourism is an outstanding market to promote in South Africa.

“The construction of big convention centres in many cities has encouraged businesses to host many sector-specific conferences here. South Africa’s participation in business tourism will become more important as the country becomes part of a global village,” he said.