South Africa kept its fourth position out of 54 countries in the 2015 Ibrahim Index of African Governance, released on Monday, and edged up in the safety and rule of law category. 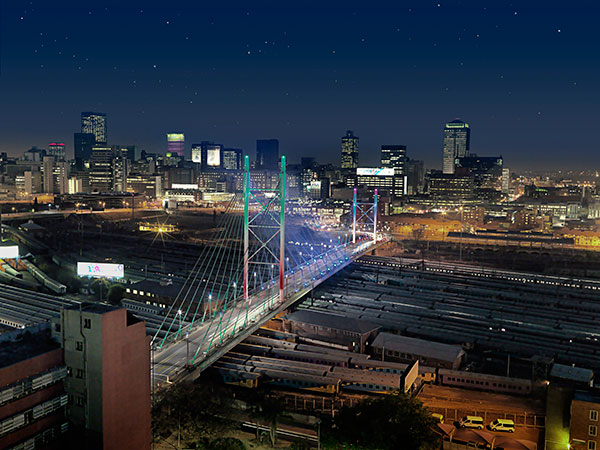 South Africa’s ranking on the 2015 Ibrahim Index of African Governance didn’t remains at fourth spot as last year. Slight improvements have been made to the country’s rule of law and rural sector. (Images: Brand South Africa)

• Piketty’s focus on inequality may also set a blueprint for the study of economics
• We look up to you: Ibrahim
• Active citizenship in South Africa at a healthy level
• South Africa rises 7 places in annual WEF Global Competitiveness Index
• What South Africa can learn from Piketty about addressing inequality

South Africa has kept its fourth position out of 54 countries on the Ibrahim Index of African Governance (IIAG), while gaining ground in the safety and rule of law category. According to the 2015 IIAG, released in London on Monday 5 October, the country’s overall score increased by 0.2 points from 72.8 in 2013 to 73 in 2014.

The Ibrahim Index ranks a country’s overall governance within the African context. It is organised into four distinct conceptual categories: economic opportunity, safety and rule of law, participation and human rights, and human development.

The IIAG, produced annually since 2007, is one of the key initiatives the Mo Ibrahim Foundation – established by Sudanese-British mobile communications mogul Mo Ibrahim – uses to improve governance and leadership in Africa.

Improved data this year allows South Sudan, Africa’s newest country, to be included in the index, together with its northern neighbour Sudan.

Within the safety and rule of law category, South Africa’s increasing standards were reflected in the score, moving from 66.9 in 2013 to 68.4 in 2014. 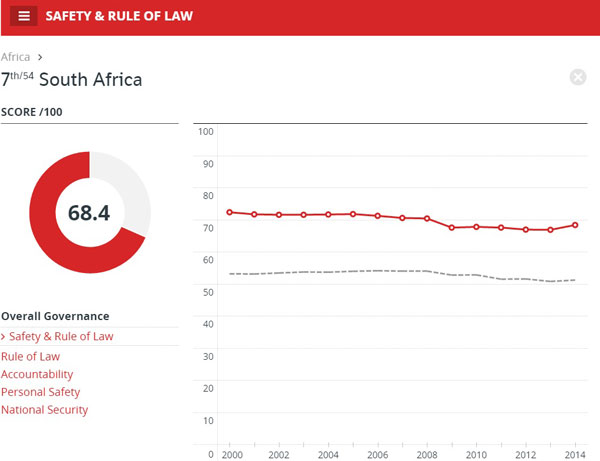 While the country’s business environment remains stable, its rural sector improved from 59.8 in the previous index to 62.3 this year. 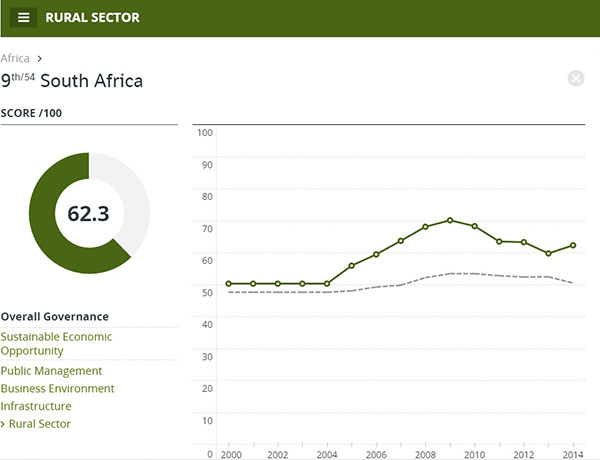 According to a statement from the Ibrahim Foundation, the gap in overall governance between the regions is widening, with Southern Africa still the best performing region with an average of 58.9. “[They are] followed by West Africa (52.4), North Africa (51.2) and East Africa (44.3). Central Africa is the lowest ranking region with an average score of 40.9, and is the only region to have deteriorated since 2011.”

There has also been a marginal improvement in Africa’s overall governance. This is “underpinned by positive performances in only two categories, human development (+1.2) and participation and human Rights (+0.7)”. However, the index found both sustainable economic opportunity (-0.7) and safety and rule of law (-0.3) have deteriorated. 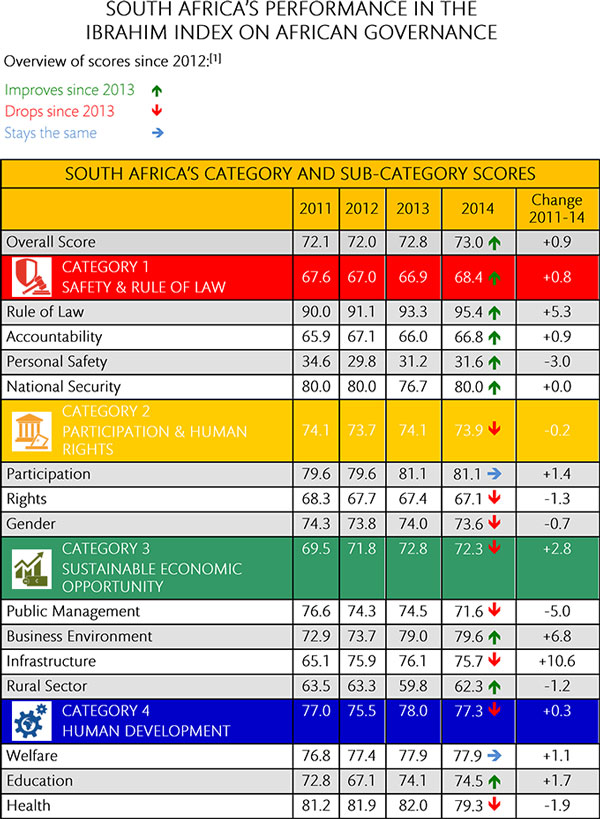 Note that the ranking cannot be compared with previous years’ data. Annual refinements are made to the scores, and the entire IIAG dataset is revised retrospectively. Analysis above therefore draws comparisons between years based entirely on 2015 IIAG dataset. For more details on methodology, see themethodologysection of the IIAG website.