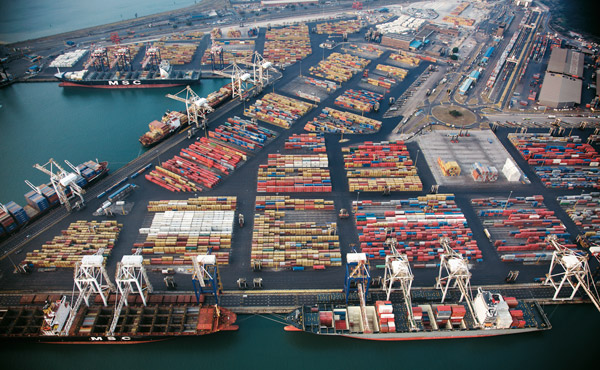 Durban harbour is one of the 10 largest in the world. South Africa’s World Bank ranking for trading across borders has jumped by 29 positions, due to the roll-out of government policy that addresses the need to decrease the time, cost, and red tape companies have to deal with to get products to port and shipped to international markets. (Image: Brand South Africa)

When the United Nations Development Programme (UNDP) published its Human Development Report in 2013, it contained powerful insights about the increasingly important role developing countries, such as South Africa and Brazil, are playing in the 21st century.

The UNDP indicates that the South (developing nations and emerging markets) currently produces half the world’s economic output. To further illustrate the significant shift in the global economic balance of power, the UNDP argues that the combined GDP of eight developing countries – Argentina, Brazil, China, India, Indonesia, Mexico, South Africa and Turkey – equals the GDP of the United States. This implies for the UNDP that countries such as Brazil, South Africa, India and China have become major drivers of the global economy and thus forces for change in the developing world.

South Africa is becoming an economic force to be reckoned with in this rapidly changing global economic and, by implication, geopolitical environment, mainly due to the long-term socioeconomic vision and the associated policy-making of its government. Its successes, in terms of its global perception and rankings in key influential indices – such as the World Economic Forum Global Competitiveness Report, the World Bank Ease of Doing Business Index, the World Economic Forum Travel and Tourism Index – could set a benchmark for other emerging countries to follow.

What emerges is a pattern of country performance indicating that South Africa matches and outperforms other peer developing countries in critical areas of national competency. These are important indicators to utilise in the process of positioning South Africa as a reliable trade partner, and attractive investment destination.

This continuing improvement in performance on the global stage is attributable to strong and highly focused government policies that support the country’s global and regional growth aspirations. As South Africa heads for 20 years of democracy, the country occupies an increasingly strong position globally, as a developing nation, in the early 21st century.

The many global economic indicators used to assess the strength of nation brands highlight that South Africa has unique competitive strengths in the context of the developing world, and these are being leveraged to good effect to enhance the country’s standing in the global marketplace. This can be seen in the broader context of South Africa’s inclusion into the Brics grouping of nations, and the country’s competitiveness compared to other developing nations.

The most recent World Economic Forum’s Global Competitiveness Index ranks the country’s financial services sector, banks and stock exchange as the top global performers, while the country places 15th globally for the quality of its air transport infrastructure.

Furthermore, South Africa, if compared to the other Brics nations, comes first in five of the 10 criteria the World Bank uses to assess ease of doing business: starting a business, dealing with construction permits, getting credit, protecting investors, and paying taxes. This means that South Africa offers protection to foreign direct investments, and is certainly a business-friendly environment wherein new trade, investment, and related economic interactions can be fostered.

The South African government’s commitment to creating an environment that makes it easy for companies to do business in the country has been recognised in the latest edition of the World Bank’s East of Doing Business Index (DBI), published in 2013. South Africa now ranks first among the Brics nations in six critical DBI criteria. The country can therefore make a strong business case to attract trade partners, investment, and clients from fellow Brics members. As a nation that offers several competitive advantages, an open business environment is an important feature to utilise as a selling point for South Africa as a business destination. New government policies introduced now make starting a business in the country easier than ever, by implementing new company law that eliminates the requirement to reserve a company name and simplifies the incorporation documents. South Africa has also made transferring property less costly and more efficient by reducing the transfer duty and introducing electronic filing.

In addition, a new reorganisation process has been introduced to facilitate the rehabilitation of financially distressed companies. South Africa has also improved its performance on the trading across borders rank. In the same World Bank Index, South Africa has significantly improved its rankings (by 29 positions), due to the roll-out of government policy that addresses the need to decrease the time, cost, and red tape companies have to deal with to get products to port and shipped to international markets.

South Africa is also praised for its government policies, rules and regulations relating to travel and tourism, and their conduciveness to the sector’s development. The country now ranks 29th out of 140 countries globally in the World Economic Forum’s Travel and Tourism Index, indicating that it has been making steady improvements in this area over the past few assessments.

South Africa ranks third in the Sub-Saharan Africa region after Seychelles (first) and Mauritius (second). Important findings from WEF indicate South Africa comes in high at 17th place for its natural resources, and 58th for cultural resources. This, according to WEF, is due primarily to the country’s many World Heritage sites, rich fauna, creative industries, and the many international fairs and exhibitions hosted. The latter can be interpreted as a strong selling point for the country, with communications implications. A further positive finding WEF indicates is that South Africa’s infrastructure is well developed for the region, directly supporting the growth of the travel and tourism trade, with air transport infrastructure ranked 43rd, and a particularly good assessment of railroad quality (46th) and road quality (42nd).

The golden thread that ties together and underpins all of these world ranking achievements for South Africa is the strength and innovative nature of its government policies, from the National Development Plan to the National Infrastructure Plan. Such strong government policy making and implementation sends a clear message to the world that South Africa is open for business and is a destination of choice for investment, based on solid and trusted fundamentals. This is a strategic, best practice approach that could be replicated for the benefit of fellow emerging market countries around the world.