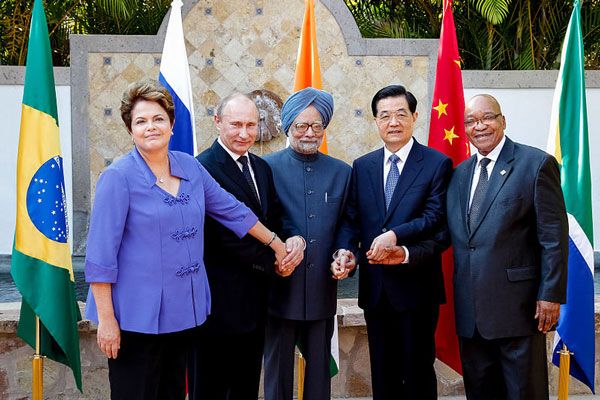 • African integration on Brics agenda
• BRICS in a nutshell
• Brics development bank underway?
• South Africa is ‘Country of the Future’
• Slow but steady: South Africa’s economy on the upward path

South Africa was formally inducted into the Bric group of emerging powers in 2011, following an invitation to join in December 2010. Its induction turned the group into Brics – Brazil, Russia, India, China and South Africa.

Brand South Africa helped to facilitate its membership. At the time, South Africa’s inclusion was criticised, with some saying Nigeria should have been taken its place.

According to Brand South Africa’s research manager, Petrus de Kock, that criticism was largely based on South Africa’s market size. “We’ve got just over 50 million people and when you compare that to other Brics nations there is no comparison in terms of population size,” he explained.

But he asserted that South Africa ranked higher than the other Brics nations in most of the categories of the World Bank’s Ease of Doing Business index.

The fifth Brics summit took place in Durban, from 25 to 27 March 2013. On the eve of the leaders’ gathering, De Kock said: “For me, one of the hopeful outcomes of the summit is business leadership, civil society and political leadership that come to the country to just have that direct exposure, and for Brand South Africa to take that opportunity to not only build our reputation but to actively build on previous experiences and mistakes.”

At that meeting, the strategic advantages South Africa brought to the coalition were tabled. They included:

● South Africa’s comparative advantage within Brics pertains to the country’s considerable non-energy in situ mineral wealth. In a report commissioned by the US’s Citigroup bank, South Africa was ranked as the world’s richest country in terms of its mineral reserves, worth an estimated $2.5-trillion. The country is the world’s largest producer of platinum, chrome, vanadium and manganese and the third-largest gold-miner, and it offers highly sophisticated mining-related professional services, contributing significantly to the Brics resource pool.

● South Africa is investing R300-billion ($35.6-billion) in expanding and improving its railways, ports and fuel pipelines as a catalyst to help unlock that vast mineral wealth. Africa will also continue to be buoyed by the exploding global demand for oil, metals, minerals, food and other natural resources. Likewise, the continent, which is arguably the world’s largest unexplored resource basin, has an abundance of riches, including 10% of the world’s oil reserves, 40% of its gold ore and 95% of platinum.

● The regulation of the Johannesburg Stock Exchange was ranked number one in the world, as was the strength of South Africa’s auditing and reporting standards. Additionally, the nation was ranked second for both the soundness of its banks and the efficacy of its corporate boards.

● South Africa is seen as a dedicated and committed global and regional player. Its constructive role in global governance structures as well as its position in organisations of the South, notably the African Union; the Group of G77 plus China, of which South Africa is the chair in 2015; and the Non-Aligned Movement is appreciated by Brics and other like-minded partners. South Africa is also the only African country represented in the Group of 20, which has become an important institution regarding the reform of the financial and economic global governance architecture.

At the conclusion of the Durban summit – Brics’ fifth – the leaders of Brazil, Russia, India, China and South Africa agreed to establish a Brics development bank to help finance infrastructure programmes and sustainable development in member nations and other developing countries.

A deal to create the $100-billion development bank and an emergency reserve fund was signed. The bank will have its headquarters in Shanghai, China and the first president will come from India. All countries will contribute equal capital; South Africa’s initial contribution was set at $150-million.

After the deal was signed, President Jacob Zuma said: “The capital contribution to the new bank will come from the fiscus. These capital contributions are similar to the ones we make to other multilateral institutions, such as the African Development Bank and the World Bank, [of which] we are members.”