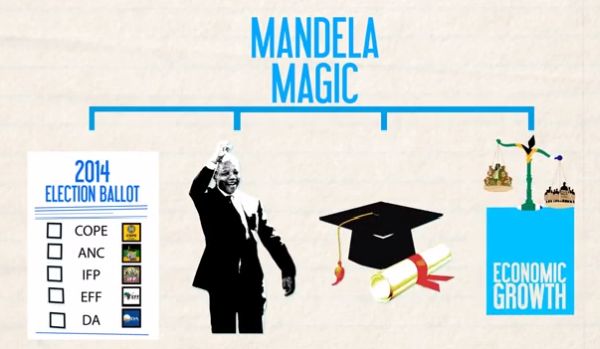 Mandela Magic can be created if South Africa’s growth from now until 2030, the final year of the National Development Plan (NDP), can increase to 5.1%. This idea was debated by foreign journalists and members of the Institute for Security Studies (ISS) in a discussion about the plan, held at the institute’s headquarters in Pretoria.

Hosted by Brand South Africa in March, the discussion looked at three possible outcomes of the NDP by 2030. ISS executive director Jakkie Cilliers explains that these include the worst-case scenario, called Nation Divided; the current political and economic climate, known as Bafana Bafana; and the ideal South Africa, called Mandela Magic. The ISS determined the results using the international futures forecasting system, which uses current data to make predictions.

Cilliers points out that the country is currently in “a sweet spot for increased growth”, which could lead it to Mandela Magic. The increase in population could help matters. The NDP forecasts the population will be at 58 million in 16 years’ time. But Cilliers disagrees, saying that ISS calculations show a 2030 population of 66.4 million. “When the NDP did their forecast they did not have the benefit of the latest census survey. And also, for reasons unknown to us, the NDP forecast that inward migration into South Africa would go down to zero by 2030, which we think is unrealistic. If migration remains at its current rate, it will be 66.4 million.”

He also says fracking will play a major role in boosting the country’s gross domestic product. Currently, it is reliant on coal and carbon for 70% of its energy and 90% of its electricity. However, Cilliers says the shale boom will allow South Africa to take income from fracking and invest it in renewable energies. “It can boost our economy substantially.”

The ISS’s three scenarios of how poverty will turn out in South Africa by 2030. Cilliers says the number of people living in extreme poverty will come down under the Bafana Bafana and Mandela Magic scenarios if appropriate policies are implemented. (Image: Institute for Security Studies)

Apart from increased economic growth, Cilliers points out that Mandela Magic is achievable if there is strong leadership and active participation from all citizens. “To create Mandela Magic, South Africans need to create a social compact in support of the NDP across all sectors of our society.”

The ISS likens the current political economic path to the South African national football team’s performances, calling them “perennial underachievers”. Cilliers explains that under the Bafana Bafana scenario, the country would make steady progress heading towards 2030, but never break free from the cycle of unemployment, inequality and unrest.

He acknowledges that the country’s economy would grow by 3.8% – relatively well compared to the European Union and the US. But under this scenario the structural limitations to faster and more inclusive growth remain the same. “Corruption will continue and [the] government only pays lip service to the NDP.”

Under Nation Divided, the worst scenario, the ANC opts for populous policies to retain support. At the same time, it appropriates and redistributes land, nationalises mines and browbeats the country’s Chapter 9 institutions. It also entrenches poverty through policies that serve elite interests. As a result of all these poor decisions, South Africa grows at a paltry 2.6%.

The graph on access to electricity shows an increase in all three scenarios. However, the differences indicate that by 2030 around 2 million more rural South Africans could be living without reliable electricity in the Nation Divided scenario than in the Mandela Magic state. (Image: Institute for Security Studies)

However, Mandela Magic sees a country with a clear development vision. According to Cilliers, this is possible with either a reinvigorated and strong ANC leadership that governs the country beyond the 2024 elections, or through the rise of a genuine multiparty democracy with the ANC losing its majority. “Both would assume a hard-nosed implementation of development.”

A Mandela Magic South Africa, he says, would grow by an average of 5.1% to 2030. As growth accelerates, employment will increase and inequalities fall. “Under Mandela Magic, our economy can be 23% larger than it currently is under Bafana Bafana.”

Among many priorities, Cilliers says, four interventions stand out as crucial to ensuring Mandela Magic: the implementation of recommendations by the Slabbert Commission of Enquiry to reclaim political accountability; the installation of a leadership that represents the highest standards of values and ethics; the commitment to quality education; and the commitment to inclusive economic growth. 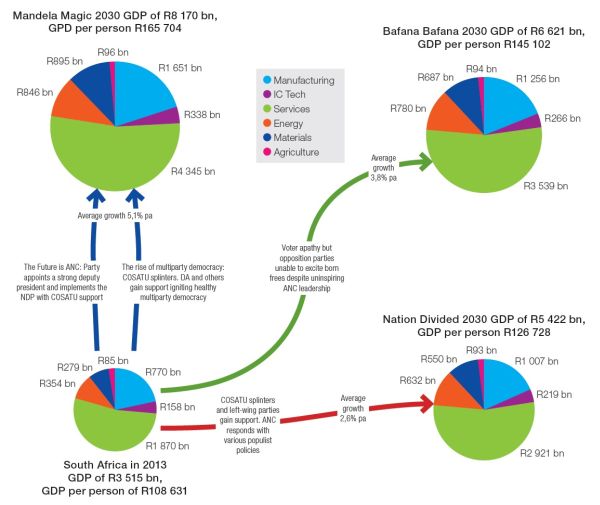 A graphic summary of the three scenarios. South Africa’s GDP under Mandela Magic would rise by almost R5-billion from 2013 to 2030. (Image: Institute for Security Studies)