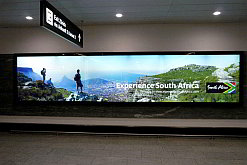 Anitha Soni, chairperson of the board of trustees of the International Marketing Council of South Africa (IMC), will receive the Brand Leadership Award at the 19th World Brand Congress in Mumbai, India, later in November.

Described as the most prestigious award an individual can receive at the congress, the award is one of several accolades to be given. Others include CEO of the Year, Media Professional of the Year, and Brand Builder of the Year.

The World Brand Congress represents 60 countries. Some 600 branding and marketing specialists are expected to participate in the 2010 event.

Soni, a tourism specialist and award-winning businesswoman, will be honoured for her “professional efforts” in overseeing the activities of the IMC, as it delivers on its mandate to manage the country’s reputation, and position South Africa as an investment destination of choice.

Under her guidance, the IMC is delivering on this mandate, both domestically and internationally. The most recent and highest-profile example is the 2010 Fifa World Cup – here the IMC’s mobilisation initiatives engendered strong social cohesion among South Africans, fulfilling the country’s 2010 brand promise to “celebrate Africa’s humanity”.

She was also instrumental in the council’s drive to position South Africa’s business and economic competitiveness at the 2010 meeting of the World Economic Forum in Davos, which saw a powerful delegation of political and business leaders departing for Switzerland to promote the country’s agenda.

While at the congress Soni will deliver a speech titled “The impact of international events on a nation’s pride and therefore its brand – sharing South Africa’s 2010 World Cup experience”.

Soni believes the award does not belong to her alone, but to all the role players in government and the private sector that participate in building the country’s brand.

“The IMC is the custodian of Brand South Africa, but the brand belongs to all South Africans,” she said. “The World Cup has shown that when South Africans act with unity of purpose, everyone contributes to growing our reputation on the international stage.

“The primary role players responsible for enhancing the nation brand are dedicated, skilled and passionate about our country. This past year they have worked with great diligence to foster relationships, engage with international stakeholders and promote South Africa.”

Soni added that the award belongs to everyone who contributed to South Africa’s enhanced global reputation, and that she would think of all South Africa’s brand builders when the award was placed in her hands.