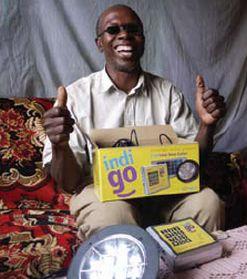 Pay-as-you-go solar technology is making
it possible for remote and off-grid
communities in Africa to generate
their own electricity.
(Image: Eight19) 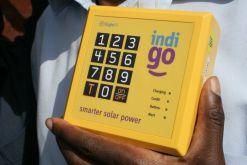 The IndiGo solar lighting system
bypasses the need for a grid connection
and works just like a prepaid
cellular phone.
(Image: Eight19)

Pay-as-you-go solar technology is making it possible for remote and off-grid communities in Africa to generate their own electricity, reducing the need for environmentally harmful and dangerous lighting practices such as burning kerosene oil.

Pay-as-you-go products have become synonymous with mobile phones, but now developers of a new solar energy service are using the same business model to bring clean, affordable and renewable electricity to remote communities in Africa.

In South Africa, similar upfront payment products such as prepaid electricity are available, but this only applies to users connected to the national grid.

According to Eight19, developers of the IndiGo solar electricity system, 1.6-billion people (more than one fifth of the world’s population), lack access to electricity via a grid and pay high prices for kerosene to serve basic needs such as lighting.

The system, which bypasses the need for a grid connection, can light two small rooms for seven hours at a time and charge small portable devices such as mobile phones.

The device is affordable and users can generate electricity for less than their current spend on kerosene. Users can purchase the energy the device produces for as little as US$1(R8) a week.

Nyungura James Ode, a rural farmer in the Nimule region in the new nation of South Sudan, explains how his life has changed since he started using an IndiGo device.

“I save about half of the money I would spend on batteries and kerosene,” Ode says.

Before, he often had to travel to a market three kilometres away from his home to buy batteries for his family’s battery-powered lanterns. He also had to charge mobile phones at charging stations in town twice a week.

“I can spend more time at home now that I don’t have to walk to the village and wait for phones to charge,” he says.

As easy as buying airtime

The IndiGo device works just like a prepaid cellular phone. When users want to purchase electricity, they buy a scratch card from a local vendor and load credit onto their solar cell.

Power from the cell then charges the battery in the IndiGo box, making electricity available.

According to Eight19, the pay-as-you-go model is an affordable way to provide power for low-energy lighting and battery charging in homes, schools and workplaces in emerging markets.

IndiGo can be used to provide light for children to do their homework, it enables stallholders to work when it is dark, and supplies the energy to power internet connections.

The risk of fraud is also very low as the units operate using top-up codes that are securely sent to owners’ mobile phones in the form of text messages. Without the codes, the system can’t generate electricity.

A need for electricity

The IndiGo devices are already improving the quality of life of people living in Africa.

Eight19 first launched in Kenya in September last year, and now the company has plans to distribute IndiGo in South Sudan.

Eight19 has partnered with WorldVenture, an international charitable organisation, to install the systems in rural villages in Nimule in South Sudan. The developer intends to distribute 1 000 units in the first half of 2012 to the region.

According to Thomas Bell, South Sudan director of projects at WorldVenture, there is a great need for off-grid power in South Sudan.

“Sometimes the poorest even burn grass despite the smoke health hazard and fire risk,” Bell says.

Eight19’s pay-as-you-go solar device is the ideal solution to give people access to electricity in a country that lacks infrastructure.

“IndiGo has the potential to transform the energy market by enabling local energy production. People can access power without having to wait for the grid,” says Bell.

Simon Bransfield-Garth, CEO of Eight19, says that the response to the product has been very positive since it launched in Kenya.

Andrews says that just as mobile phones have made it possible for people to access telephone technology without a landline system, Eight19’s approach could do the same for electricity provision to the world’s poorest people.

Bransfield-Garth hopes that his company can also help to reduce global carbon emissions by eliminating the use of kerosene for lighting in Africa.

In the future, Eight19 wants to develop larger solar systems with greater capacities to power televisions, radios and fridges.

He says that this means that people living in remote communities could have access to similar levels of electricity available in big cities.