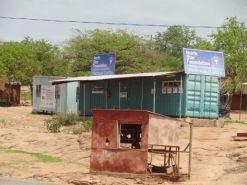 The North Star Alliance is a cross-border
HIV prevention initiative that has set
up a network of roadside wellness
clinics along key transport routes
in Africa.
(Image: border-lines.com)

Africa’s five leading social entrepreneurs for 2012 have been announced at the World Economic Forum (WEF) on Africa, underway in Ethiopia.

Two South Africans, Paul Matthew and Andrew Muir, are among the winners who have applied their entrepreneurial savvy to promote transformation and find creative solutions to challenges facing the country.

Social entrepreneurs in Africa aren’t afraid to drive change and find innovative solutions to challenges in various fields such as education, health, environmental sustainability and enterprise development – just some of the major continental issues identified by the WEF on Africa.

Some 700 leaders from government, business, civil society and academia from Africa and the rest of the world are currently in Addis Ababa debating these issues.

Africa’s leading social entrepreneurs and 19 other winners from around the world will be adding their voices to the discussions, offering their perspectives on sustainability and social innovation on the continent.

According to Hilde Schwab, chairperson and co-founder of the Schwab Foundation for Social Entrepreneurship, these creatives have a valuable role to play when it comes to finding new solutions to challenges such as access to healthcare, education, energy and housing to marginalised communities.

“They ensure that growth, such as that experienced in Africa, is and will be inclusive,” Schwab says.

Sub-Saharan Africa is now home to seven of the fastest growing economies in the world – and South Africa is one of them. The continent has been identified as the next major area of growth for the global economy, but at the same time it also has to attend to its challenges.

This is where the creative problem-solving techniques of social entrepreneurs are making a major contribution.

Healthcare for mobile workers in Africa

Paul Matthew, director at North Star Alliance, received the award for his foresight in establishing an organisation that addresses the impact of HIV/Aids on mobile workers such as truck drivers in Africa.

The North Star Alliance is a cross-border HIV prevention initiative that has set up a network of roadside wellness clinics along key transport routes in Africa. The programme is ensuring that much needed quality health care is available to truckers who use these routes, and also to the communities surrounding them.

The project is a valuable addition to the world health care system, and it is in line with the WEF’s objective to find innovative healthcare delivery models in Africa.

The centres take care of truck drivers by providing prevention and treatment services such as HIV counselling and testing, as well as treatment for sexually transmitted infections.

Truck drivers are considered the backbone of economic growth on the continent and many businesses in Africa rely on them as a resource. North Star’s observation at its inception was that with the incidence of disease being so prevalent, the numbers of drivers available to transport freight has, over time, decreased dramatically.

Since opening its first centre in 2005 in Malawi, North Star has set up 22 additional centres in 10 countries across the continent.

Environmental activist Andrew Muir, executive director of the Wilderness Foundation, has dedicated his life to conservation and social development.

Muir describes the foundation as a conservation organisation with a very strong people focus.

“We try to find the link between nature and people,” he says.

The foundation is set apart by its focus on motivating people to take care of the environment as a means to bring about social change.

More than 100 000 disadvantaged and vulnerable young people from all over South Africa have benefitted from the project through its social intervention and environmental education programmes.

Thousands have been trained as community leaders and national park rangers while, under the stewardship of the foundation, more than 200 000 hectares of African wilderness have been rehabilitated.

Muir spent many years working closely with Dr Ian Player, one of the world’s most respected conservationists and founder of the world-famous Wilderness Leadership School and Wilderness Foundation UK. When he took the baton from Player, Muir assumed the responsibility of managing the various organisations founded by the renowned conservationist.

South Africa is one of the most biodiverse countries in the world and there are many benefits to using the country’s natural capital to create green jobs.