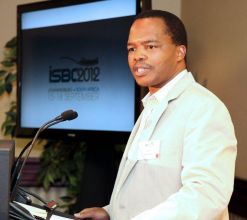 Septi Bukula said that the congress will
expose South African businesses to
opportunities in the country and
other parts of the world.
(Image: Septi Bukula)

Small business in South Africa will get a boost next year when the country hosts one of the biggest international business congresses in Johannesburg.

Representatives from the US, Europe and the rest of the world will gather at the Sandton Convention Centre between 15 and 18 September 2012 for what will be Africa’s first International Small Business Congress (ISBC).

The congress, which is hosted in partnership with The City of Johannesburg, Foundation for African Business and Consumer Services, Khula Enterprises and Finance and the Small Enterprise Development Agency, will showcase activities surrounding small business development in South Africa and around the world.

According to 2012 congress director Septi Bukula, the focus of the conference is to expose small and medium enterprises (SMEs) to business opportunities in South Africa and in different parts of the world.

The congress will also host an exhibition where companies can display and market their products.

The theme for the event is Fostering small business in new and high-potential industries worldwide, and will concentrate on getting SMEs involved with emerging industries with high-growth prospects.

Since the first congress in Hawaii in 1974, the ISBC has brought together global small business players looking to improve small business practices with a particular focus on entrepreneurs and their environment.

The 2012 event is a milestone for the ISBC and the continent, as it will be the first time the congress is hosted in Africa.

“ISBC recognises that South Africa is an exciting destination and Africa is an emerging global player. The ISBC is trying to build in Africa because it never really focused on it before,” said Bukula.

Topics to be discussed at next year’s congress include e-commerce and how small firms can use the internet to their benefit.

Other discussion topics will be mechanisms to strengthen management capacity; gathering and disseminating information on new and high-growth opportunities; incubation and technology demonstration; as well as innovation, intellectual property, and research and development capabilities.

The poor state of the current global economy has had a negative impact on small businesses worldwide, according to Bukula. This will also be one of the main talking points at next year’s congress.

“We will be looking at the impact of the current global economy. We may also cover ways in which small businesses will respond to a depressed economy,” he said.

However, he added that in many instances, small businesses do not have the capacity to respond to a struggling economy.

The congress will also address the difficulties small businesses face when accessing new markets, looking for finance to either start-up or expand, and operating under strict government regulations.

Though these challenges relate to small businesses worldwide, South Africa has its own hurdles. Bukula said the country’s small businesses are hampered by limited skilled labour, which he attributes to the education system.

“Our entrepreneurial abilities are not very strong because of the … education system. We don’t prepare people to be self-employed,” he said.

Although the government has invested a lot of money in small business development, Bukula said there is a need to develop more entrepreneurs in the sector.

He said that the gap can be closed if students and pupils realise that becoming an entrepreneur is a viable career choice. Bukula is working with the Department of Trade and Industry to find strategies to address this challenge.

Findings of a study conducted by the University of Cape Town’s Graduate School of Business Centre for Innovation & Entrepreneurship revealed that South African students’ role-models are politicians, pop stars and sports stars. “Not a single entrepreneur was listed, yet they are the ones who are the backbones of the economy and provide jobs,” Bukula said.

This is because entrepreneurs, especially those who are struggling, are stigmatised by society if they fail.

He added that attitudes towards business need to change to ones that are not fearful of failure.

“Instead of stigmatising business people who struggle or fail, they should be encouraged to try harder, try again or try something else,” said Bukula.

He explained that individuals who have work experience and the necessary skills and knowledge are well-equipped to start their own businesses, but they do not think of entrepreneurship as an option.

The reason, he said, is a shortage of programmes to encourage individuals to become business people.

One way to encourage individuals to become entrepreneurs is for the government to provide incentives when starting up a business, according to Bukula.

Entrepreneurs must be given access to existing support programmes so that they can gain confidence knowing there is a back-up system in place.