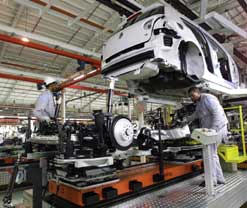 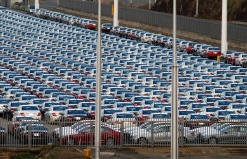 The country exports over half a million vehicles a year to various markets around the globe.
(Images: MediaClubSouthAfrica.com. For more free photos visit the image library)

South Africa’s automotive industry may not currently be in serious trouble, but its current situation is not sustainable, with a widening skills gap and fierce international competition remaining key challenges.

A roundtable discussion on the skills needs and competitiveness of the sector took place on 26 October 2012 at Pretoria’s Innovation Hub, with the goal of enumerating all the aspects that the sector must improve on to keep the country’s spot in the international industry.

Research manager for Brand South Africa, Dr Petrus de Kock, facilitated the discussion and welcomed participants to what he said would hopefully be a breakthrough for the industry as it would give insight into where energies should be focused.

Miller Matola, CEO of Brand South Africa, opened the proceedings by mentioning the purpose of the discussion, one of many that his organisation will engage in to get industry leaders to speak to the public.

One of the key points in Brand South Africa’s mandate, said Matola, is to continuously gauge the country’s competitiveness across various fields, and to do that his organisation uses different indices that help put things into perspective.

“We believe that if you can’t monitor it you can’t measure it,” he said, adding that the organisation focuses on several indices across the spectrum of the National Brands Index.

With eight of the largest vehicle assembly plants in the world, the sector employs some 300 000 people of varying skills sets. The plants of international brands such as BMW, VW and Mercedes-Benz are concentrated mostly in Gauteng and the Eastern Cape. The low production costs associated with manufacturing in South Africa have been the drawcard for multinationals over the years.

Speaking about the work of his organisation and the industry it operates in, Barlow Manilal, CEO of the Automotive Industry Development Centre (AIDC) – an industry body mandated by the government to help lift and sustain the standard of the country’s competitiveness in the global field – alluded to the red flags that South Africa has to note in order to stay relevant.

“The automotive industry is export oriented,” he said, “while some of our competitors are wealthier than us, and do not have the social issues that we have to deal with as a country.”

The AIDC’s vision for the year 2020, said Manilal, is to double local content, in terms of the value of vehicles produced at the assembly plants, by 35% to 70%. Production output per annum, which is currently at 600 000 units, must rise to 1.2-million units if the country is not to be overtaken by its competitors.

“A large part of that vision relates to the training we have to instil in the sector,” said Manilal, adding that it is not about the number of people who receive this training, but whether or not it is appropriate to the needs of the industry.

Manilal used the example of China, which he said has an engineer for every 130 people in its population, while South Africa has one for every 3 166. This, he said, shows a discrepancy in the training sector, particularly for disciplines that require technical skills like mathematics and science.

There are at least 50 000 technical vacancies in South Africa that cannot be filled, because there are not enough people with the minimum educational requirements.

Although the Further Education and Training colleges (FETs) manage to graduate thousands of skilled students as artisans every year through their various programmes, the problem remains that these people are not easily absorbed by the industry.

They are either not compliant with industry standards or find it hard to compete with their counterparts from universities, who are able to provide not only artisan-level skills, but can apply knowledge of maths and science to their daily job requirements.

In an effort to gain industry insight into what is wrong with the current South African situation, Brand South Africa invited the executive director of Tata Automobile Corporation South Africa, Sudhir Babshet, who has been part of the company’s leadership in South Africa for over 10 years.

Babshet agreed that the situation in South Africa needs urgent attention, and offered a solution to it, saying that the focus on the country’s education as a whole should be in primary education, where pupils can be motivated and moulded in fields that they are naturally good in.

“This way you avoid university drop outs at the current rate,” said Babshet, “because children would have appreciated their skills from a young age and grown up knowing what they have to offer their country.

“Education forms the basis of the problem of skills shortages in this country.”

Tata Africa Holdings, the group’s African headquarters, has been doing business in South Africa since 1994.

Chief research specialist for the Africa Institute of South Africa, Dr Thokozani Simelane, blamed the current situation partly on a weakness in the government’s efforts to integrate its skills development strategies.

“You have one programme that should be speaking to another, as they will be serving complimentary purposes, but neither is aware of the other’s mandate and how it can benefit its own ideals.”

Speaking on the threats that the global automotive industry is facing, Manilal pointed to an article in the financial daily Business Report, which reported on the recent closure of a Ford van factory in the UK, with a potential loss of 2 000 jobs in the process .

“This for me is a red flag for our local industry,” he told participants, “because it means that if it can happen in the UK, it probably can happen anywhere in the world.”

While the observation led to a brief discussion on where South Africa’s export prospects should lie, in light of the small, gradual changes in the global landscape, participants also shared possible solutions to the problem.

Simelane noted that South Africa remains a lucrative market for used vehicles, which he said are imported from abroad.

“We have to move away from being the dumping ground for these units,” he said. As the world progresses towards more environment-friendly technology in vehicle manufacturing, such as the electric car, South Africa faces the risk of being on the receiving end of what will then be unwanted stock of these used cars.

“This will mean that we will fall behind, once more, in terms of advancing towards this technology.”

Innovation in our approach, Simelane added, is the only way South Africa will achieve the successes of the countries that lead industries across the globe.

Turning the situation around

To reverse the sector’s skills problem, several recommendations were made by members of the panel and the rest of the participants.

Asked how the absorption of students into the industry can be made easier, Manilal called for a proactive approach by FETs.

“Colleges must take accountability for penetrating the industry,” he said, “and should set up alumni programmes where they monitor the progress of former students and whether their skills are actually being used.”

The AIDC, he said, is embarking on an eight-year plan that includes an academy. They will target rural schools, teaching pupils about the automotive industry from school level, so that they don’t only get to know about it when they leave college.

He also called for the private sector to set up initiatives to adopt and sponsor schools, to help impart the necessary skills from a young age. This, he added, could be incentivised by tax rebates from the government.

Simelane, on the other hand, said the input-output ratio for FETs needs budget changes.

“We should rather take funds from the budget of organisations like the National Youth Development Agency and redistribute these to the FET-oriented industry to enable it to absorb artisans.”

On a national level, asserted Manilal, the government should look into an accreditation system for schools across all grades, including primary level. This way, we have a sustainable record of which schools perform better in which areas, and under which circumstances.

Manilal has plans to boost TIA