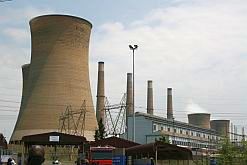 Sasol is set to build a R1.8-billion gas
power station with a capacity of 140MW.
(Image: Bongani Nkosi)

The R1.8-billion (US$262 000) facility, which will produce electricity from natural gas, will have a capacity of 140MW and will supply energy to Sasol’s operations.

Sasol is currently one of the biggest carbon emitters in the country, along with national energy utility Eskom, because of their dependence on power derived from the burning of coal. According to Sasol, electricity produced from natural gas rather than coal will result in fewer emissions.

Loubser said the Gas Engine Power Plant project is predicted to enable the reduction of close to 1-million tons per annum of carbon dioxide, once the complete project is rolled out.

He said the project falls in line with Sasol’s aim to increase the energy efficiency of its South African utilities by 15% per unit of production by 2015.

“The project will make a significant contribution to improving the country’s current electricity supply situation,” said Loubser, “by freeing up electricity that would otherwise have to be imported from the national grid.”

The South African government has been trying to boost power supply since the 2008 electricity crunch that led to rolling blackouts across the country. The government wants to cut its carbon emissions by reducing its reliance on coal.

South Africa uses coal to generate most of its electricity and a significant proportion of its liquid fuels. Because of this, South Africa is the 14th highest emitter of greenhouse gases. As a signatory to the UN Framework Convention on Climate Change and the Kyoto Protocol the country has committed itself to reducing emissions.

The 2008 power supply crisis has put pressure on the country’s government to move faster with its plans to look into sustainable sources such as nuclear power, natural gas, and other forms of renewable energy.

While the cost of electricity in South Africa is among the world’s lowest, rapid industrialisation and the country’s strong economic growth have seen demand for power exceed supply. Eskom and the government have responded to the crisis by announcing a massive programme to expand power-generation capacity.

Eskom is currently working on constructing two new coal-fired power stations to meet rising demand. Over the next five years R343-billion ($50-billion) will be spent on building more power stations, the first of which will start operating in 2013.

Construction of Sasol’s plant is due to start this month and it is expected to start producing electricity by the end of 2012. Loubser said the plant will allow Sasol to be more self-sufficient in its electricity requirements, and reduce its reliance on Eskom power.