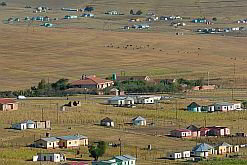 Qunu in the OR Tambo District Municipality
is one of the areas in South Africa with an
electrification backlog and the IEC initiative
makes sure the people of the district
have a source of energy.
(Image: MediaClubSouthAfrica.com. For
more free photos, visit the image library) 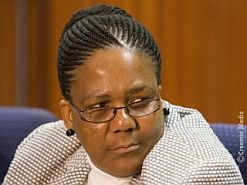 An Integrated Energy Centre (IEC), recently established in Qunu in the Eastern Cape, will hopefully broaden access to power in the rural village and address poverty in the region.

The centre is a one-stop energy hub owned and operated by the local community. It provides safe and sustainable sources of energy and gives villagers information on how to handle and utilise them.

Launched on 14 January 2011 by Sasol and the Department of Energy, the IEC will supply locals with paraffin, diesel, petrol, gas burner stoves and solar-powered devices.

With the centre close by, villagers will no longer have to walk vast distances to source their energy, mostly in the form of paraffin and candles. There are still parts of the region that lack access to electricity.

The centre, which cost R8-million (US$1.2-million) to establish, forms part of Sasol’s R20-million (US$2.9-million) drive to set up energy hubs in disadvantaged areas. Similar plants have been built in Limpopo, Northern Cape, KwaZulu-Natal and North West.

At the Qunu launch, Minister of Energy Dipuo Peters said: “Last week the president stressed the need for us to focus very strongly on job creation. We believe that this IEC and the local enterprises that it could support will create the necessary jobs in this area.

“The Qunu IEC is the first one to be linked to a library to ensure that information is accessible to local people. This would be enhanced by access to more information via the internet connected to the computers on site,” added Peters.

The IEC also has an information centre and community room that can be used by people living in the area.

Sasol media manager Nothemba Noruwana said: “The aim of these centres is also to inject profits back into the community by building schools, clinics and various other projects.”

The IECs also have a village vendor network consisting of women and youngsters who go out and sell the energy products to people living further away from the centre so their travel costs are minimised.

Qunu is the birthplace of the first democratically elected president of South Africa, Nelson Mandela. In his autobiography, Long Walk to Freedom, Mandela describes Qunu as the place in which he spent most of his happiest moments as a child.

Peters said: “The department has embarked on a special intervention to try and accelerate the electrification programme in the area. Funds are being allocated directly to the municipality to undertake electrification in Eskom’s area of supply.”

“In the Qunu area, 300 connections were completed in December 2010 and a further 300 households will be connected by the end of January 2011. There is a backlog of 179 318 houses without electricity … the challenge for the department will be to ensure that sufficient funding is allocated in the following years so that the universal access is achieved by 2014,” added Peters.

Sasol is an energy and chemicals company which uses coal to produce petrol and gas.

It was established in 1950 and today operates in more than 30 countries with about 35 000 employees.

Sasol is listed on the Johannesburg and New York stock exchanges.

The petrochemical company offers a bursary scheme which enables students from disadvantaged backgrounds to study engineering, science and commerce.