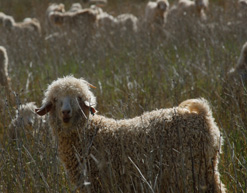 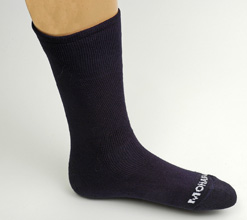 The natural elasticity of mohair stimulates
blood circulation while its high absorption
rate draws moisture away from the foot.
(Image: Cape Mohair)

South Africa is the world’s leading producer of mohair, a unique natural fibre produced by Angora goats. Now the fibre’s special properties are helping diabetics across the world avoid one of the disease’s most debilitating effects.

One of the complications of diabetes, a disease suffered by some 300-million people across the world, is a reduction of blood circulation to the extremities. This causes foot problems such as infections and ulcers and, in extreme cases, can lead to amputation. For diabetics, foot care is crucial.

A new range of socks developed by South African mohair processor Cape Mohair offers better foot protection to diabetics worldwide. Called the Medi Sock, it makes us of mohair’s natural elasticity that enhances circulation, and high absorption rate that draws moisture away from the foot.

“These are the fantastic attributes of mohair that people don’t always know about,” said Denys Hobson, chief executive of Cape Mohair.

Cape Mohair examined similar products sold elsewhere in the world, but none of them were adequate. “We realised that there is a great need for decent socks for diabetics,” Hobson said. Before the product was launched, it was tested for eight months and refined many times over with the help of people living with diabetes.

The socks are made from locally produced mohair yarn from Angora goat kids, which provide a fine-textured hair. Coarser mohair will irritate the foot.

Neil McCleland of Cape Mohair said the export potential of the sock could lead to the consumption of an additional 30 tons of mohair a year. This will be a significant boost for South Africa’s mohair industry, already considered the world’s leading producer of the natural fibre.

The Medi Sock is fast gaining market share and recognition internationally; in the UK it is already considered a product leader. Cape Mohair recently received its 21st bulk export order from the UK, and plans to expand the sock’s market into the US and Europe.

So far, conventional uses of mohair have been in the fashion industry, interior design and by craft and industrial fibre specialists. Rugs, blankets, throws and shawls are some of the more well-known mohair products.

According to Hobson, South Africa’s well-established mohair industry produces over 60% of the world’s mohair. Some 95% of the fibre is exported to countries such as Italy, China, the UK and France.

Production is concentrated in the Eastern Cape province, considered to be the mohair capital of the world: 80% of all South African mohair production comes from the region. The country has two of the world’s major combing mills, where the “greasy” fibre is processed to combed mohair tops. Mohair yarn is manufactured in Port Elizabeth and Uitenhage, in the Eastern Cape.

Finished products such as rugs and blankets are also produced in the province, and mostly exported. Interestingly, South Africa is not a large end user of mohair, as the fibre has never been marketed locally.

Angora goats were introduced to South Africa in the 19th century, but only by lucky chance.

According to Mohair South Africa, the goat is believed to originate from the mountains of Tibet, making its way to Turkey in the 16th century.

The story goes that in the 1800s a South African farmer in Turkey wanted to establish the breed in his own country. But the Turkish sultan he approached, who knew the value of the goats, was not keen to share his secret. So in 1838 the sultan sent the breeder 12 infertile Angora rams and a single ewe. But unknown to him, the ewe was pregnant, and gave birth to a ram kid. This was the beginning of Angora breeding in South Africa.

Over the past 150 years attentive stock management has made the South African Angora goat the dominant producer of fine mohair fleece in the world. Selective breeding has also made the local variety hardier, able to thrive in South Africa’s harsh dry conditions

“Good breeding has always been a priority in the sector and farmers have done this to ensure the quality of the wool remains high,” said Hobson. “Farmers’ attention to detail has contributed to sector being held in such high esteem internationally.”

In the past two decades world mohair production has dropped considerably, from a peak of 26-million kilograms in 1988 to 5.3-million kg in 2008. Reasons for the decline include the labour-intensive nature of mohair farming, price sensitivity due to fashion trends, and the conversion of South African Angora goat farmland to game ranching.

The introduction of game farming in the Eastern Cape has had a negative impact on Angora goat farming in the region, Hobson said. However, some farmers have re-established their operations in the western parts of South Africa. The goats seem to thrive in the region, so much so that in some cases they are replacing the area’s traditional ostrich farming.

In celebration of the International Year of Natural Fibres, South Africa will be hosting the inaugural international biennial Mohair Summit from 3 to 8 November in Jansenville and Graaff-Reinet in the Karoo. The event will be attended by local and international growers, buyers, manufacturers, sellers, fashion designers and interior decorators.

The United Nations declared 2009 the International Year of Natural Fibres in an attempt to highlight the role that natural fibres play in contributing to food security and poverty alleviation.

The use of natural fibres in clothing, household furnishings and industries has declined as a result of the development of synthetic fibres. Synthetic materials such as polyester, acrylic and nylon are widely used because they are cost effective and can be mass-produced. Sadly, competition from synthetic materials has affected millions of people who rely of the production and processing of natural fibre for their income.