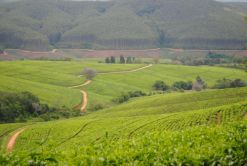 The Sapekoe Tea Estate on the hills of Magoebaskloof in Limpopo comprises two estates, Middelkop and Grenshoek, on 1 000 hectares of land. 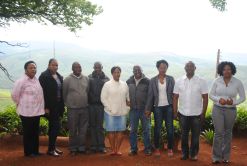 The Magoebaskloof community in the Tzaneen area of Limpopo province will be reaping the fruits of enterprise, when an abandoned tea tree plantation is revitalised into a project that will create over 500 new jobs in 2013.

The plantation was operated by international tea maker Lipton since the 1960s, but the company left in 2006 when the land was returned to the people, through the Mamphoku Makgoba Community Trust, as part of South Africa’s land redistribution programme.

Lipton had been supported in its efforts by the Industrial Development Corporation (IDC), a state-owned finance institution that was set up in the 1940s to encourage industry development and promote economic growth.

Although it is yet to yield monetary value, the Sapekoe Tea Estate project will see a majority of the people in the community – which has a high unemployment and illiteracy rate – secure jobs, with profits from the business going towards the trust. The IDC is also involved in the Sapekoe community project.

“With the initial funding of R15-million (US$1.7-million) from the Limpopo Department of Agriculture,” explained Gteda CEO Kwena Maphoto, “we started with the pruning of the trees and are now rehabilitating them.”

A majority of the work will be in the fields, while an additional six managerial positions will become available.

Gteda, said Maphoto, involved the community from the early stages of the project, when feasibility studies were being done.

“This is going to be their project once it takes off, so they need to know exactly what’s going on,” he said.

A pot full of opportunities

Agriculture is a key economic driver for the Tzaneen region, and thus has the most potential for job creation.

The 1 000-hectare Sapekoe property consists of the Middelkop and Grenshoek tea estates. In addition to funding from the provincial government, the project also received another R9-million ($1-million) through the Limpopo Agri-business Development Corporation in 2012 to improve the condition of the existing tea trees.

Maphoto said the company, once in operation, has a number of possible offshoots that include producing organic tea and iced tea, as well as the processing and packaging of various brands of tea.

“There is also the possibility of tea garden tourism, and the diversification of the estate into forestry and avocado production,” he said.

Nothing had been produced on the estate for over six years before the revamp of the area started in 2011.

The goal for the Makgoba community is to develop appropriate, viable and sustainable business plans for the two tea estates with the assistance of an external investor.

“This is to generate sustainable income, create jobs, and facilitate economic growth and capital investment that will address the problems of poverty, low absorption rate of labour force into the economy,” said Maphoto.

To date Gteda has provided equipment worth just under R5-million (US$571 000) for the people of Makgoba to get the operation off the ground so that the transition will be easy when they take over the running of the establishment next year.

The gesture also gave the community a sense of ownership over the production process.

Through the feasibility study undertaken before the revitalisation of the tea estates, it was discovered that the phytonutrient extraction technology for the production of high purity bioavailable green tea extract was the most appropriate to pursue.

These extracts are used in juice drinks, iced teas, isotonic drinks and yoghurts.

According to Maphoto, the technical and financial assessments of the green tea extraction technology at both Middelkop and Grenshoek indicate a very high profit margin which could be realised in the first year following the rehabilitation of the tea estates.

“The Makgoba Trust can receive financial benefit of up to R30-million (US$3.4-million) per year when the business is in full production,” he said.