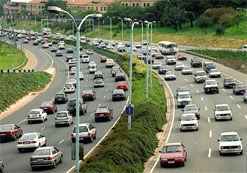 Frustrated Gauteng drivers can look forward to new developments that will ease peak-hour traffic, which over the past 10 years has increased to three hours in the morning and evening respectively.

The South African National Roads Agency Limited (Sanral) has put forward the Gauteng Freeway Improvement Project, which will see freeways opened up to at least four lanes and in some cases, six in each direction. Other measures include improved interchange access, better lighting, traffic management strategies such as high occupancy lanes, intelligent transport management systems including live cameras and electronic signs that supply up-to-date information, and electronic toll collection.

The portion of the N1 national highway between Johannesburg and Pretoria carries 180 000 vehicles every day and is just a small section of the 16 150km of major national roads overseen by Sanral. This well-travelled stretch is included in the 500km of freeways to be serviced by the freeway improvement project, which Sanral developed in association with the metropolitan areas of Tshwane, Johannesburg and Ekurhuleni, and provincial and national government.

The resulting network of interconnected inner and outer ring roads around Gauteng, including a direct road link to Soweto, will optimise the movement of private and freight vehicles as well as road-based public transport.

A feasibility study has established the project can be financed through a toll system. This, says Sanral, is a fair method of payment for a service that is used. However, the participation of the public will be required before toll collection points can be implemented. Tolls will be collected electronically, ruling out the need for construction of toll plazas and allowing motorists to travel unhindered.

The bulk of the project is due for completion in time for the 2010 Fifa World Cup, according to Sanral, and there will be a break in work during the tournament so travellers won’t be inconvenienced. Final completion is planned for October 2010, with toll operations due to start that same month.

Phase one, worth R11.5-billion ($1.4-billion) across seven contracts, will cover 125.5km of roads. Construction is already underway and is expected to take about 2.5 years. It involves boosting the capacity of existing freeways and new roads where necessary, while upgrades for the other sections are currently on the design board and are expected to go out to tender in the next few months. Environmental impact assessment studies are also in progress.

Gauteng is South Africa’s smallest province, but it is the economic and business hub of the country. According to the Gauteng Economic Development Agency, the province contributes 10% of the gross domestic product (GDP) for the African continent and a third of South Africa’s entire GDP. Gauteng is also known as Africa’s financial services capital, with over 70 foreign banks establishing their regional head offices in the province.

Statistics South Africa, in its 2001 population census, determined that 8.8-million people live in Gauteng – this is about 20% of the total South African population. Gauteng is also the fastest growing province in the country with a population growth of 20% between the 1996 and 2001 censuses.

With such expansion, Gauteng’s roads infrastructure has failed to keep pace and traffic load is now more than what freeways can handle.

There have been many motivations for the new road and traffic plan. Due to lingering peak-hour traffic, drivers now have to take extra road time into account, frustrating commuters and cutting into private time, says Sanral.

Congestion also pushes up travel costs in terms of fuel consumption and wear and tear – another blow for motorists already hard-pressed because of rising fuel prices.

Excessive road congestion affects productivity, adds Sanral, as hours are wasted sitting in traffic. It also says that insufficient capacity on Gauteng’s roads is a deterrent to development, forcing businesses to relocate or scale down. The agency also says increased gas emissions from overloaded freeways are a major environmental concern.

Sanral says the scheme will benefit not only private and commercial drivers but also those using public transport through the implementation of high occupancy lanes, which will be integrated with bus rapid transport systems, taxi, bus and train routes. Plans also include transport hubs for public transport facilities.