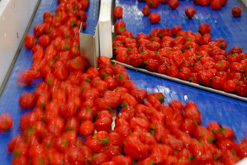 At a food processing company in the
Eastern Cape, baby peppers are prepared
for pickling and bottling. Foodstuffs are
exempt from tariffs under the terms
of the new free trade area. (Image:
Rodger Bosch, MediaClubSouthAfrica.com.
For more photos, visit the image library)

One of the largest free trade areas in Africa came into effect in August 2008. The Southern African Development Community (SADC) has instituted its regional free trade area (FTA), which was officially  launched on 17 August 2008 during the 28th SADC summit.

South Africa assumed the rotating chair of SADC in August, and hosted the delegation of heads of state and government in Sandton, Johannesburg. The conference was preceded by a council of ministers. South African Foreign Minister Nkosazana Dlamini-Zuma led the South African delegation.

“We are hoping that by the end of this summit, as the incoming chair we will have a clear road map of what SADC wants to do in the next year,” said Dlamini-Zuma at a briefing before the summit. “Ours is to make sure we implement decisions that will be taken during the summit. The highlight of this gathering is integration, as we are launching the SADC free trade area.”

A free trade area comes into being when a group of countries agree to allow goods to pass between them free of trade mechanisms such as tariff and non-tariff barriers. Member countries do not adopt a common tariff regime for non-members but pursue their own schedules. A customs union, in contrast, also allows tariff-free trade between members but adopts a common tariff schedule for non-members.

Speaking at the same briefing, SADC Executive Secretary Dr Tomaz Salomao of Mozambique added, “There are three major issues before the summit. Firstly, the elections of the SADC chair. Currently the chair of SADC is Zambia and the incoming chair is South Africa, and the summit will decide the next incoming chair after South Africa.

“Item number two is the review of the political situation in the region. Item number three is the launch of the FTA, and finally the readmission of Seychelles.”

Seychelles withdrew from SADC in 2005 due to financial constraints. Seychelles would attend the council as an observer, said Salomao, but was expected to rejoin by the end of the summit.

Some 170-million people live within the SADC FTA. As such, the initiative is expected to provide more opportunities for trade and employment, and will herald a surge of economic growth, industrialisation and competition among companies. According to SADC, regional trade is likely to increase from its current annual value of about R2.8-trillion to R3.4-trillion ($360-billion to $431-billion).

The SADC FTA is the culmination of years of work, which started when SADC members signed the SADC Trade Protocol in 1996. The protocol, which came into effect in 2000, does away with customs tariffs on many goods, mainly foodstuffs, and was a precursor to the establishment of the FTA.

“Let me officially declare that SADC has achieved the status of a free trade area, which is an achievement of great significance,” said President Mbeki, speaking at the launch of the FTA. “Regional economic cooperation and integration offer us the opportunity to pool our limited resources and build an economic base to address the challenges of economic growth and development.

“Secondly, regional economic integration can create the basis for regional markets and industries to overcome the limits of small national markets, to achieve economies of scale, and enhance competitiveness as a platform to participate more effectively in the world economy.”

Experts say that manufacturers will enjoy enhanced market access and increased revenue with exposure to regional markets. On the other hand, consumers will benefit from cheaper and more diverse product ranges on supermarket shelves as goods will no longer be subject to customs duties, and producers will be competing for business.

SADC has canvassed the private sector on its views regarding the FTA, and many companies are expecting greater foreign direct investment into the region as well as more opportunities for joint business ventures.

To monitor the implementation of the FTA, a Trade Monitoring and Compliance Mechanism has been set up by SADC. This body will ensure that SADC member states implement agreed programmes and provide a facility for resolving problems on a day-to-day basis. Its effectiveness, says SADC, depends on the full and active participation of the business community, which must take the lead in identifying problems related to cross-border trade.

As the SADC FTA comes into effect, 12 of the 14 members to date have set up an FTA. The two countries that have not begun to reduce their trade tariffs are Angola and the Democratic Republic of Congo, but it is anticipated that they will join the FTA in the future, boosting trade by about R559-billion ($71-billion) and adding 77-million people to the SADC market.

The goal is to achieve a zero tariff structure on 85% of goods by 2008, with the remaining 15% of tariffs on products such as textiles, motor vehicles and clothing to be implemented by 2012.

SADC member states have also agreed to remove all non-tariff barriers and not impose any new ones, unless there is an impact on issues such as health and safety or national security.

SADC members have also adopted the Regional Indicative Strategic Development Plan which outlines the steps needed for extended regional economic integration. The FTA is the first step along this road map. Further strategies include the establishment of a customs union by 2010, a common market by 2015, a monetary union by 2016, and a single currency and regional central bank by 2018.

The FTA facilitates the movement of goods across SADC borders in a number of ways. As well as synchronised customs procedures and better customs cooperation, costs are reduced with the introduction of a single standardised document for customs clearance throughout the region.

In addition, more streamlined border posts are to be established to halve the time spent there. There are three such one-stop pilot projects in operation at the moment, at the borders of Mozambique and Zimbabwe (Forbes-Machipanda), South Africa and Mozambique (Lebombo Ressano-Garcia) and Zimbabwe and Zambia (Chirundu).