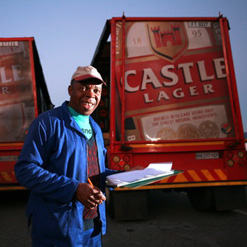 An SABMiller distribution worker
stocktaking a delivery of Castle Lager at
one of the company’s Johannesburg
depots. Castle was the company’s very
first beer product, launched in 1895 and
still going strong today.
(Image: One Red Eye/Philip Meech,
SABMiller)

From a small beer company established amid the rapidly growing goldfields of Johannesburg in 1895, South African Breweries (SAB) has grown to become the world’s largest brewer by volume, operating in more than 60 countries on five continents.

CE Graham Mackay, one of the architects of this successful international expansion, says he keeps careful watch over developments in beer markets around the world to make decisions from a global perspective.

“Even in the depths of apartheid, when the country was isolated,” Mackay said in an interview with BusinessWeek, “we still would travel the world comparing our operating practices with those we found overseas, and studying how the Americans ran their wholesaling system, how the Germans ran their quality. There was benchmarking all the time.”

Birth of an international brewing giant

In 2002 SAB merged with North American brewer Miller Brewing in 2002 to become SABMiller. The new company initially struggled to grow its market share, facing stiff competition from its archrival Anheuser-Busch, maker of Budweiser. In 2005 Anheuser-Busch imposed aggressive price cuts on its light and economy products during the summer holiday period but SABMiller still managed to expand its Miller Lite brand, although the economy segment did not fare as well.

“Anheuser-Busch’s advantages are in the mainstream, where they have huge operating scale and can provide superior levels of service,” Mackay told Fortune magazine in 2007. “So I think we’ll take them on in things they are not as good at, which is premium brand development.”

South African Norman Adami, recently retired after heading the US operation since 2003, has been hailed for boosting sales of Miller brands in that country, as well as his progressive vision in implementing strategies to make Miller more competitive with its rival. These included improving Miller’s relationship with its distributors, and introducing a system that made staff more accountable for their performance. He also initiated a one-day course for employees that took them back to the basics of beer making, with the aim of rekindling the passion for brewing.

In the first three years of Adami’s tenure, Anheuser-Busch’s shares fell 4% while shares of SABMiller rose by 190%.

Anheuser-Busch and SABMiller have faced off in other territories as well. In 2004 the beer giants fought it out over Harbin Brewery in China. SABMiller, which already owned 29%, put in an offer to buy another 29% but was outbid by Anheuser-Busch. SABMiller came back with a counter-offer, only to be outbid again. However, the company declined to continue with the bidding war, and in the end made a tidy profit by selling its current 29% share of the Chinese brewer, whose shares had jumped in value with the final bid by Anheuser-Busch.

Today SABMiller operates in more than 60 countries on five continents and has invested in emerging economies such as India, China and Eastern European countries as well as in developed markets.

Development of this portfolio of successful global brands is one of SABMiller’s strategies for future growth – the company intends to make some, if not all, of these brands available in all of its markets worldwide. Focusing on premium brands will also play a role in the company’s continued expansion, with increasing personal wealth in territories such as China and India resulting in a greater demand for premium beer.

With its US$1.2-billion acquisition of internationally popular Dutch beer Grolsch in February 2008, SABMiller came to top the list of global brewers by volume. Its production outstrips that of rivals Belgium-based InBev, iconic Dutch brand Heineken and Bavarian brewer Anheuser-Busch. SABMiller also produces wines, spirits, and fruit and energy drinks, and is one of the largest Coca-Cola bottlers in the world.

A vision for growth

The newly established South African Breweries became the first industrial listing on the Johannesburg Stock Exchange in 1897 and in 1898 listed on the London Stock Exchange, setting up an office there.

In 1910, with the formation of the Union of South Africa and its subsequent incorporation into the Commonwealth, SAB seized the opportunity to spread northwards with the establishment of Rhodesian Breweries in what was then Salisbury.

In 1950 SAB relocated its head office from London to Johannesburg, affirming its commitment to its country of origin. Meanwhile, in 1951 Rhodesian Breweries invested in a new brewery in Ndola, Zambia, and the following year opened a branch in Bulawayo, Rhodesia.

In 1953 construction started on the Castle brewery in Isando, east of Johannesburg. At the time it was one of the most modern facilities in the world but today is no longer in operation. SABMiller currently operates seven breweries around South Africa, from Polokwane in Limpopo to Cape Town in the Western Cape, and several locations in between.

In spite of heavy beer taxes imposed by the South African government in 1955, SAB was able to spend £400 000 in 1956 on buying out its rivals Ohlsson Brewery and Chandlers Union Brewery, who were both struggling as a result of the beer tax. The resultant consolidation of production and distribution facilities around South Africa allowed for a more efficient and cost-effective operation.

With the lifting of the prohibition on black South Africans buying and drinking alcohol boosted SAB’s sales, with the country’s majority able to join its ranks of customers.

SAB reached another milestone in 1964 when it obtained the right to brew Guinness in South Africa, becoming the first company outside Ireland to be granted this licence. The following year the company received permission to produce Amstel in South Africa, after successfully negotiating with Amstel Brouwerij of Amsterdam. Continuing on the expansion track, SAB took a minority shareholding in South West Breweries, which later became known as Namibia Breweries Limited when the country gained independence in March 1990.

The company’s portfolio grew once again in 1966 with the inclusion of Carling Black Label, brewed under licence from the US-based Carling Brewing Company.

During the apartheid years, when sanctions were in place and global investment was out of the question, SAB diversified into other areas such as hotels and retail, as well as other types of beverages.

SAB took a controlling stake in the Stellenbosch Farmers’ Winery group in 1960 and immediately put funds aside for research into the cultivation of more varieties of grape. Non-alcoholic beverages such as tea and coffee also became part of the company’s investment portfolio. In 1967 SAB branched out into food production through its subsidiary Food Corporation.

The launch of Southern Sun Hotels in 1969 took the company’s operations into the hospitality sphere. Along similar lines, SAB also bought a 38% share in property development company Retco Limited. In 1974 the company diversified further into retail with the acquisition of chain store group OK Bazaars, and later, clothing store group Edgars.

SAB has since sold off its retail and manufacturing assets in order to focus on its core business.

Strengthening its grip on the world

Although SAB had invested during the very early days in Rhodesia, now Zimbabwe, it was only decades later that its operations spread to other Southern African countries. In 1973 SAB opened breweries in Botswana and Angola. Swaziland Breweries came into the fold in 1976, followed by the Lesotho Brewing Company and Maluti Mountain Brewery, both in Lesotho, in 1981.

However, trade and cultural sanctions were imposed in 1985 in protest against South Africa’s continuing policy of apartheid. It wasn’t until the early 1990s, once it became apparent that South Africa was heading irrevocably for democracy, that international trade became possible again.

Eastern Europe was quickly identified as a primary target market, especially after the collapse of communism and the fall of the Berlin Wall in 1989. SAB made its first purchase in this region in 1993, entering the Hungarian beer market. Two years later it invested in Lech Breweries in Poland and today the Polish operations are responsible for the greater part of SABMiller’s profits in Europe.

Further Eastern European investment during this period saw SAB setting up operations for the first time in Romania, and acquiring breweries in Slovakia and Hungary.

Around the same time SAB targeted the Asian market, initially setting its sights on China. After negotiations with China Resources it acquired joint control, with that company, of Snow Breweries. Snow beer is now China’s biggest-selling beer and has grown at least 70% every year since SABMiller started to market the brand intensively in 2004.

SAB listed on the London Stock Exchange in 1999 to raise capital for an international expansion drive. With £300-million in the bank the scene was set for SAB to make larger acquisitions and become a true global player.

In 2000 it made its first foray into the Asian subcontinent with the purchase of Narang Breweries in India. During the following year it became the first international brewing company to enter Central America through the acquisition of breweries in Honduras and El Salvador.

In 2002 SAB acquired 100% of the Miller Brewing Company in North America from the Altria Group, moving into the world’s largest developed beer market, and with the merger became known as SABMiller.

The acquisition of Miller marked a change in SAB’s growth strategy, from smaller acquisitions in mostly emerging markets to becoming a big player in one of the world’s wealthiest and most developed markets.

SABMiller has plans for its subsidiary to become even bigger. In October 2007 Miller announced that it was negotiating with Molson Coors Brewing to combine the US and Puerto Rico operations of the two companies. The new group MillerCoors, say analysts, will have a bigger distribution network and by consolidating operations will be able to achieve annual cost savings of an estimated $500-million after three years, becoming more competitive. The merger will be completed during the course of 2008 once final agreement has been reached.

Since 2002 SABMiller has invested in Poland, Italy, Morocco, Algeria, Vietnam, and Slovakia, and expanded its operations in China, Russia, Australia, South America and India. China in particular holds huge potential for breweries, as it is now the world’s biggest market for beer consumption.

Wayne Hall, SABMiller finance director in China, says that the company aims to develop about five big brands, and one huge brand – Snow beer, produced by subsidiary Snow Brewers. However, the premium market is not as much of a priority as it is in other countries because, says Hall, there are already 20 international brands jostling for position. Instead, SABMiller will focus on the mainstream market for now.

SABMiller attributes much of its global success to the fact that South African managers placed in key positions overseas were able to deal effectively with the local cultures through their multi-cultural experience back home. And, says Graham Mackay, the company paid great attention to its mergers and acquisitions strategy, assessing potential purchases carefully before taking any action. The success of this strategy can be seen in the position the company occupies today.