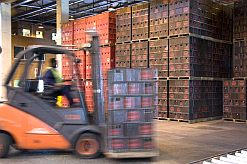 SABMiller is cleaning up its act by installing
an anaerobic digestion treatment plant for
its waste water.
(Image: MediaClubSouthAfrica.com. For
more free images, visit the image library)

The world’s second largest brewer SABMiller has introduced a cost-saving and environment-friendly treatment for the waste water flowing out of its Alrode plant, south of Johannesburg.

In doing so the brewing giant is reducing its carbon footprint by using the resultant biogas as fuel instead of coal.

UK-based SABMiller, which started as the South African Breweries and evolved to become a multinational powerhouse, has installed an anaerobic digestion plant to break down the waste water that accumulates during every production run.

The methane gas produced from this is used to power massive boilers that are essential to the brewing process, thereby reducing the company’s reliance on fossil fuels.

Until recently the effluent would have ended up in a normal municipal treatment plant, where it would be purified through various physical and chemical means. The cost of treatment is dependent on the volume of effluent and the concentration of organic waste carried in it.

At the Alrode plant, the 5-million litres of water, and the accompanying 25 tons of organic matter, which is discarded every day is expensive in more ways than one.

Instead, the new two-stage anaerobic digestion process converts 90% of those 25 tons of organic solids into biogas with a methane content of 85%. The other traces in natural gas are carbon dioxide and small amounts of hydrogen sulphide.

This is the first stage, which produces about 9 200 normal cubic metres of biogas every day.

The cost-saving implications are huge – for every biogas-powered boiler, the fuelling of which constitutes stage two of the process, SABMiller is burning 10.4 fewer tons of coal and saving US$925 (R7 000) every day.

And the municipality saves big on electrical and chemical costs of treating the waste it used to receive from SABMiller, as all treatment is now done on-site.

With more electricity tariff hikes looming large, it makes sense to implement savings wherever possible. Furthermore, excess power produced may be sold back to Eskom, the national electricity utility, under the new feed-in tariff scheme.

Since the Alrode pilot has lived up to expectations, there is a good chance of other breweries in the group adopting this environment-friendly waste treatment process.

Environmental engineering company Talbot & Talbot, based in Pietermaritzburg, KwaZulu-Natal, supplied the biogas reclamation equipment. The company specialises in waste water treatment and has said that SABMiller’s biogas project has effectively set them on the path towards greener operations.

SABMiller is one of the case studies featured in the Ethical Corporation Institute’s guide to effective water management and stewardship, published in November 2008.

In the beer brewing process carbohydrates found in grain are processed during the production cycle, converted first to a sugary liquid known as wort, and then fermented by yeast to produce ethanol and carbon dioxide.

The brewing process results in large volumes of waste water. According to the 2008 publication The Beer Brewer’s Handbook, it is estimated that for every litre of beer, between three and 10 litres of waste water are produced – even with the advances of modern technology.

Brewery waste water contains traces of all ingredients used during brewing. It has a high biochemical oxygen demand (BOD), which is the amount of oxygen taken up by microorganisms that decompose organic material in water. A high BOD reading is a sign of a high level of water pollution.

It is therefore very suitable for further anaerobic treatment, which generates an efficient alternate fuel source known as biogas, as well as biofertiliser, which is kinder to the soil than chemical fertiliser.

Like natural gas, biogas can be used to generate electrical or thermal energy. It is commonly used to power vehicles or boilers.

The anaerobic digestion technique has tremendous economic and environmental implications. Since the process occurs naturally in landfills, subjecting organic waste to digestion before it is discarded will reduce methane and carbon dioxide emissions from rubbish dumps. It will also cut down on emissions from trucks taking garbage to landfills.

The production of renewable energy through waste recycling also has the potential to create new jobs, and the sale of surplus energy can increase profitability.