With South African Finance Minister Trevor Manuel having presented his annual budget to parliament on Wednesday, the country’s government budgeting system has been rated as the second most transparent in the world – ahead of such wealthy democracies as the US, New Zealand, Norway and Sweden.

This is according to the International Budget Partnership’s (IBP) recently published Open Budget Survey 2008, which evaluates whether central governments give the public access to budget information and opportunities to participate in the budget process, and examines the ability of legislatures and auditors to hold their governments accountable.

According to the survey, the world’s most transparent countries are the UK (with a score of 88 out of 100), South Africa (87), France (87), New Zealand (86), and the US (82).  The survey classified these five countries as “providing extensive information”.

“These top performers include both developed and developing countries,” the IBP said. The organisation said in a press release that the strong showing of South Africa, as well as that of Slovenia, Sri Lanka, and Botswana (all of which provide significant information to their people), demonstrated that developing countries can achieve transparency given sufficient willingness of their governments to be open and accountable to their people. 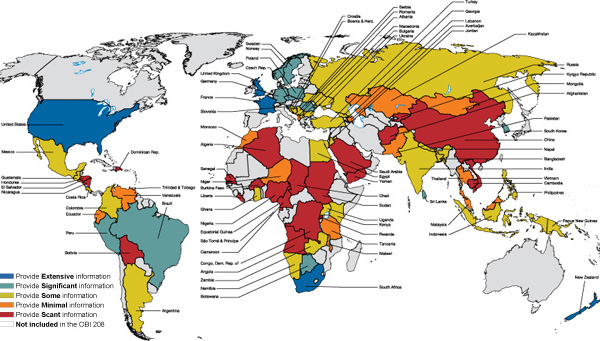 Alarmingly, the report revealed that 80% of the world’s governments fail to provide adequate information for the public to hold them accountable for managing their money.

Nearly 50% of 85 countries whose access to budget information was carefully evaluated by IBP provide such minimal information that they are able to hide unpopular, wasteful, and corrupt spending.

To simply measure the overall commitment of the 85 countries to transparency and to allow for comparisons among countries, IBP created the Open Budget Index (OBI) from the Open Budget Survey 2008.

A budget is a government’s plan for how it is going to use the public’s resources to meet the public’s needs. Transparency means all of a country’s people can access information on how much is allocated to different types of spending, what revenues are collected, and how international donor assistance and other public resources are used.

Transparency is an important first step to holding governments accountable for how they use the people’s money.

“Open budgets are empowering,”  says Warren Krafchik, IBP’s director. “They allow people to be the judge of whether or not their government officials are good stewards of public funds.

“Our goal is to promote increased public access to government budget information. We’ve seen how this can lead to concrete improvements in people’s lives.”

The index score is largely based on whether a country makes eight key documents available to the public. These are the pre-budget statement, executive’s budget proposal, citizens’ budget, enacted budget, in-year reports, mid-year review, year-end report, and audit report.

It found that only three of the five top countries – the UK, South Africa and New Zealand – publish all eight key documents, including a citizens’ budget. France does not produce a mid-year review, while the US publishes neither a pre-budget statement nor a citizens’ budget.

Of the 85 countries in the survey, 68 do not publish such a document, even though it would require no further data or analysis to produce.

But 17 developed and developing countries do produce a citizens budget. The survey noted that several countries, including South Africa, publish the citizens’ budget online.

South Africa also has the online “Tips for Trevor” system, in which ordinary citizens can send budget suggestions to Finance Minister Trevor Manuel.

Where the public’s access to the internet is limited, the citizens’ budget is another way to inform the public about the budget and can be published in newspapers and magazines or broadcast on radio and TV.

“For most people, an oral presentation is the most accessible,” Krafchik says.

“Restricting access to information hinders the ability of the public, journalists, commentators, academicians, and civil society organizations to hold officials accountable and creates opportunities for governments to hide unpopular, wasteful, and corrupt spending,” the IBP says.

Lack of information also hinders the ability of other government bodies, such as legislatures and national audit offices, to do their jobs effectively.

More than this, legislators in many countries receive budget information too late to allow them to adequately review it or to hold the public hearings necessary to foster debate and careful scrutiny.

The survey found that in 24 of the 85 countries, the legislature received the budget six weeks or less before the budget year begins.

According to the IBP, when citizens have access to information and opportunities to participate in the budget process, they are able to improve the decisions made about what to spend public money on and the quality of how the money is actually spent. That means that the allocation of scarce public resources is more equitable and effective.

The first Open Budget Survey was completed in 2006, when 59 countries were studied. The 2008 Survey includes 85 countries, chosen to provide a balanced geographic sample of countries around the world.

There is a slight improvement in the 59 countries where the study was repeated, the IBP says. Based on comparative data from the first two Surveys, improvements in overall performance can be attributed primarily to changes in government policies. For instance, the desire to join the European Union led to greater budget transparency in Bulgaria and Croatia.

Nepal climbed a bit from the bottom of the index largely because a constitutional crisis resulted in an election that led to more normal function of previously dysfunctional government institutions.

In several of the cases in which improvements were observed, governments were able to significantly increase access to information by simply releasing that which they already produced.

“The findings suggest that access to information can easily be improved at minimal cost and in relatively little time,” Krafchik says.