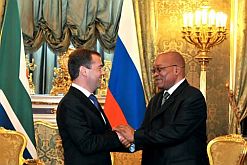 Russia has the largest uranium-enrichment
capacity in the world, and has signed a
deal to supply uranium to South Africa from
2011 to 2017
(Image: The Presidency)

The deal was signed in Moscow on 5 August 2010 during Zuma’s three-day state visit to Russia, which was undertaken to strengthen ties between the two countries.

“During this visit we have certainly taken our relations with Russia to a higher level politically,” said Zuma.

“We have also laid strong foundations for people-to-people cooperation, and also to work together on international multilateral issues.”

Russia has long viewed Africa as an attractive investment destination owing to its wealth of natural resources. Medvedev said the uranium deal was only the beginning in developing relations between his country and the continent.

According to the deal, Russia will provide technological support and uranium for South Africa’s nuclear power stations – and may even look into building its own plants in the country. This will see Russia controlling 45% of South Africa’s uranium market.

Russia’s uranium-enrichment capacity is currently the largest in the world.

This was Zuma’s first state visit to Moscow since becoming president in 2009. He was accompanied by 11 government ministers and more than 100 business people.

“The size of the government and business delegation emphasises our commitment to consolidate and further deepen bilateral relations with this country,” said Zuma.

Wrapping up the visit on 6 August, the South African president said he was pleased with the outcome: “After our successful talks, we are convinced that this visit will afford us an opportunity to further consolidate and enhance relations at both the bilateral and multilateral levels.”

However, Zuma said there was still room for better cooperation in all sectors represented by his delegation. He added that he would identify new opportunities that could further enhance the agendas of the two countries.

“We are keen to obtain lessons from the Russian Federation’s own transformation. It has been one of the most breathtaking in recent economic history.”

Zuma’s visit fell in line with his aim of extending trade and investment ties with the fast-growing economies of Brazil, Russia, India and China – also known as the BRIC nations. South Africa is hoping to become the fifth member of this alliance.