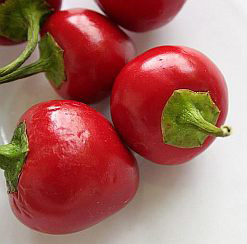 The piquanté pepper from which the
Peppadew range is produced was found
in 1993 by South African farmer Johan
Steenkamp when, holidaying in the Western
Cape province, he spotted a bush covered
with red fruit that looked like a cross
between small peppers and tomatoes.
(Image: RecipeZaar)

Peppadew is the brand name of a range of pickles and sauces made from a particular variety of sweet-tasting peppers (Capsicum baccatum) known as “piquanté”. The products are processed and bottled by Peppadew International using a secret recipe.

Despite using no preservatives, the company claims a 24-month shelf life for its peppery products.

Import and export company Strohmeyer & Arpe, which currently markets the Peppadew range in the US, describes the fruit as “the first truly new fruit to be launched on the world market since kiwifruit”.

Bell has manufacturing operations in five countries, and research facilities in 10. The company was established in 1912 and is a globally respected supplier of flavours and fragrances to the food, beverage, cosmetic, household, personal and oral care, and tobacco industries around the world.

The exclusive licence agreement to produce liquid Peppadew flavour was signed in mid-October 2009. Bell’s agreement with Peppadew International means that it is now the only flavour house allowed to use the Peppadew name.

Bell believes that Peppadew piquanté peppers could be the next superfruit, and the flavour has huge potential for a host of uses. Superfruit are those natural wonders that have such exceptional nutritional, health and taste qualities that they can actually attract customers to a brand and retain them, and consequently are specifically marketed as such.

Bell’s marketing director Michael Natale, speaking to FoodNavigator-USA.com, praised the peppers for their unusual piquancy, describing them as “very interesting … unlike anything you have tasted before, a mixture of sweet and spicy”.

This unusual flavour means that Bell is able to target its Peppadew flavour at sweet applications as well as savoury. Natale noted that the combination of sweet and spicy originated in the chocolate industry, with its famous chilli chocolate. He named baked goods, confectionery and ice creams as just a few of the possibilities, as well as beverages and savoury sauces.

But this is just the start, said Peppadew International MD Phillip Ovens. “We want to diversify our range overseas, but within category, so not outside the pickled category range. Over the next 10 years, our goal is to have an international brand.”

In January 2009 Bell released its three-category list of the top 10 flavours to look out for in 2009. The list is compiled from various sources, including market research companies and the media, tracking trends on four continents, and analysing samples requested over the previous 12 months.

While Peppadew didn’t make the sweet list, it came in eighth on the savoury list and did even better on the beverage flavour list, ranking fifth.

Peppadew piquanté peppers are grown primarily in the Tzaneen area of South Africa’s Limpopo province. As picking and de-seeding is done by hand, the growing demand for the product has created over 4 800 jobs in the field, and more than 200 in the factory.

Peppadew International also supports its supply base of around 80 farmers with training and technical assistance.

Piquanté peppers belong to the Solanaceae family of nightshade plants, and share the genus Capsicum with many other chilli peppers, ranging in taste from mild to blisteringly hot. Botanically, chilli peppers are fruit.

Compared to the world’s hottest chilli, the Naga Jolokia which comes in at a searing 1 040 000, the piquanté barely bites at 1 177.

Its mildly spicy but sweet flavour makes it popular in all sorts of recipes such as pizza, pasta, salads, omelettes and dips. The piquanté also tempts when stuffed with a range of soft cheeses.

The plant was reportedly discovered in 1993 by South African farmer Johan Steenkamp. On holiday in the Western Cape province, he spotted a bush covered with red fruit that looked like a combination of small peppers and tomatoes.

Steenkamp realised the plant’s potential the minute he tasted a piece of the fruit and he decided to cultivate it with dried seeds from the original plant, which is not indigenous to South Africa but is believed to have somehow made the Atlantic crossing from South America.

It has taken some years to breed the strongest plants from that original batch, develop the processing methods, perfect the recipes, and register the trademark Peppadew. The product has germinated into a winner, and today is available in a number of countries and has taken the culinary world by storm.

Steenkamp has since sold his share of the company and is not involved in any way, but he does collect royalties on the original product, said Ovens.