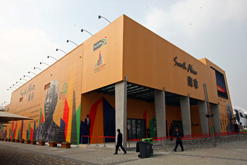 Final touches being made to the South
African pavilion at the 2010 Expo Shanghai
China. The Expo will run for six months,
with 100-million people – double South
Africa’s population – expected to attend.

South Africa’s economic ties to China were strengthened today with the opening of the country’s pavilion at the massive six-month Expo 2010 in the eastern port city of Shanghai, the largest centre of commerce and finance in mainland China and the showpiece of the world’s fastest-growing major economy.

With the payoff line “The Rise of a Modern Economy – Ke Nako! It’s Time!” – the latter being the same slogan for the 2010 Fifa World Cup – the pavilion offers visitors a taste of the best that South Africa offers and its advantages as a strategic partner with China, given that country’s increasing interest in Africa. Each month until the end of October the pavilion will have a different theme: the 2010 Fifa World Cup, urban renewal, tourism and heritage, environment, and trade and investment.

Relations between China and South Africa are said to be at their strongest since the countries established formal diplomatic relations in 1998, four years after the 1994 democratic elections which welcomed South Africa back into the international community after decades of isolation under apartheid.

In 2007 the Chinese government established the China-Africa Development Fund to encourage its enterprises to invest in Africa. By the end of 2008 the fund had invested US$400-million in 20 projects, raising China’s total investment in Africa to $2-billion.

With the largest economy in Africa, South Africa is seen as the gateway to the rest of the continent and an important strategic trade and investment partner for China. In 2009 the total trade between China and Africa amounted to $106-billion, 45% up from the previous year, of which South Africa accounted for 20%. China’s imports from Africa amounted to $56-billion, a 54% increase.

At the 2010 Expo Shanghai South Africa aims to promote its most promising industries: agriprocessing, minerals and metals beneficiation, mining and defence technology, ICT, and alternative energy such as biofuels. The pavilion, opened by South Africa’s international relations minister Maite Nkoana-Mashabane, uses the rondavel round house as its motif, interpreted in a modern way fusing traditional designs with modern materials.

Expo 2010 Shanghai is the largest ever held, with some 300 pavilions over an area of 5.3 kilometres. With the theme “Better City, Better Life” it is expected to attract 100-million visitors – double South Africa’s total population – during its six-month run from May to October.

The Expo continues a long tradition of World Fairs begun with the Victorian Great Exhibition in London’s Crystal Palace in 1851. Paris’s 1889 World Fair saw the erection of the Eiffel Tower, while the following event, Chicago’s 1893 World Fair, was the impetus for the invention of the Ferris wheel, with an 80-metre-high wheel erected in a bid to outdo the Eiffel Tower.

While earlier World Fairs or Expos focused heavily on industrialisation and cultural exchange, from the World Expo 1988 in Australia onwards countries started to use them more as a platform to improve their overall image, or nation brand.