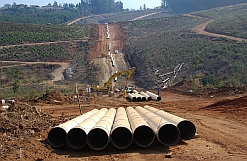 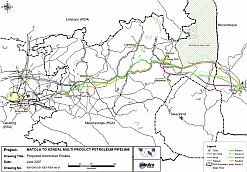 The proposed route of the new pipeline.
(Image: Petroline Holdings)

Construction on a R5.8-billion ($620-million) fuel pipeline between the Mozambican port of Matola in Maputo province and Kendal in South Africa is due to start later in 2009. The 450km-long pipeline will transport up to 3.5-million litres per year and is expected to prevent potential fuel shortages in South Africa.

The multi-product pipeline will take just six months to build, as project operator Petroline intends to have it up and running as early as possible in 2010. Petroline is a locally-registered company that also owns the sections of the line that run through South African soil.

When complete the pipeline will facilitate the importation of petrol and diesel from Mozambique, which has extensive natural gas and coal reserves but no oil reserves. Of the pipeline’s total capacity of 3.5-million litres of fuel and diesel, a maximum of 1.5-million litres will be diverted to Nelspruit while the remainder will be transported to Kendal.

“Our aim is to have this project operational before 2010,” said Mateus Kathupa, CEO of shareholder Petróleos De Moçambique (Petrómoc), “in order to have an additional capacity in terms of oil supplies to South Africa.”

Matola is closer to Johannesburg, South Africa’s busiest city, than the port of Durban which is the traditional entry point for fuel imports.

The pipeline will travel 64km from the existing coastal storage facility at Matola in Mozambique to the South African border at Komatipoort. It will then run for a distance of 135km between Komatipoort and Nelspruit in Mpumalanga province, followed by the 249km stretch to Kendal. At its final destination there is the possibility of the pipeline joining with the current Transnet Pipelines network for inland distribution of fuel.

The refurbishment and upgrade of Matola port is part of the project, as are new tank storage facilities at the Nelspruit depot.

Annual revenue from the new pipeline is expected to exceed R7.5-billion ($800-million).

The Mozambican-South African consortium Petroline Holdings received its licence to build the pipeline from the National Energy Regulator of South Africa at the end of March 2007.

Petroline has four major shareholders – these are the Woesa Consortium which holds 25%, Gigajoule International with 20%, Petrómoc with 40% and Companhia De Desenvolvimento De Petróleo Moçambique which holds 15%.

Construction of the pipeline was originally scheduled for September 2008 but was delayed because the environmental impact studies have not yet received final approval. According to Katupha, issues such as compensation to people who live on land across which the pipeline will pass have yet to be resolved.

Five studies have been undertaken, three in South Africa and two in Mozambique. In South Africa the national Department of Environmental Affairs is working on the project and in Mozambique it is the Ministry of Coordination of Environmental Affairs that must give the go-ahead. Approval is expected no later than May 2009, following which construction will begin apace.

In December 2005 South Africa suffered severe fuel shortages which impacted on many sectors of the economy. Airlines lost revenue because their planes were grounded, while many farmers suffered losses because they could not harvest at the optimal time. Motorists had to drive to several locations before they found a functioning service station.

The Moerane Report of 2006, under the leadership of Advocate Marumo Moerane, investigated the crisis and found that one of the major causes of the shortage was the lack of adequate pipeline capacity in South Africa. This caused disruptions in the chain of supply.

Additionally the Moerane commission predicted that the current economic growth rate in South Africa meant that there was a strong possibility of fuel demand outstripping supply capacity by mid-2009, as inland supply routes were not up to the task.

The new pipeline is expected to alleviate much of the shortage in capacity and go a long way towards ensuring that such a crisis will not happen again.

Since it operates in both South Africa and Mozambique, the pipeline presents another prime opportunity for integration and development between countries in the Southern African Development Community.

Because the direction of flow can be reversed, the line could also be used to ferry fuel products to out of South Africa for distribution to neighbouring countries such as Botswana.