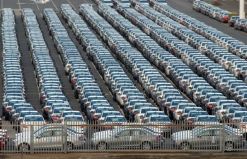 South Africa has been named African Country of the Future 2013/14 by fDi Magazine, a London Financial Times publication.

“A worthy winner, South Africa has consistently outperformed its African neighbours in FDI [foreign direct investment] attraction since fDi Markets records began in 2003,” says the magazine in its August/September edition. South Africa has the continent’s biggest economy, with gross domestic product (GDP) at $5,8-billion or R3-trillion.

Morocco is ranked second for FDI, with Mauritius in third position, followed by Egypt, Kenya, Ghana, Nigeria, Botswana, Tunisia and Namibia. South Africa also took the top prize in two other categories: best economic potential, and best business friendliness. “The South African economy has grown since 1994 almost exactly at the average for middle-income economies excluding China – and three times as fast as in the 1980s,” writes Neva Makgetla, the deputy director-general in the Department of Economic Development, in the Sunday Times of 20 October.

Kenya has done particularly well, climbing from 10th position in 2011/12 to fifth position this year. It is an innovative country that strives to diversify its economy. Its use of M-Pesa mobile phone payments, for example, have encouraged new investment opportunities.

The magazine indicates that South Africa attracts about a fifth of all FDI into Africa, more than double the second biggest FDI destination, Morocco. In 2012, that amounted to $4.6-billion, with almost 14 000 jobs created. Johannesburg, the commercial heart of the country, in Gauteng, was the top FDI destination on the continent in 2012.

According to fDi Markets, this means that South Africa now ranks as the 16th top FDI destination country in the world. Since the global economic crisis of 2008, FDI globally has dropped 20%. In 2012, the figure improved slightly, settling around 14.3%. Seen against this background, Africa has fared better than other world regions, with FDI on the continent only down 7.9% in 2012. However, in the first five months of 2013, FDI in Africa fell, levelling out at about the same as global averages, down 27%, compared to 28% for the rest of the world.

“Unrest, corruption and severe income disparities persist in Africa, though an emerging middle class with increased disposable income, a marked improvement in governance and the availability of natural resources present an attractive opportunity for investors,” indicates the report. “Despite a slight decline of 3.9% in 2012, South Africa increased its market share of global FDI, which further increased in the first five months of 2013 as the country attracted 1.37% of global greenfield investment projects.”

In addition, South Africa has attracted more research and development investment than any other African country, the magazine points out, and it accounts for the largest number of patents registered on the continent.

According to a recent report by the African Development Bank, Africa’s economy is growing faster than that of any other continent. Of the 54 African countries, almost half, or 26, have now achieved middle-income status, with countries like South Africa, Morocco and Mauritius leading the pack.

Gauteng province contributes 40% of the country’s GDP, with Joburg at its heart. The city is the top destination for FDI in Africa, and in the first five months of 2013, was one of five African cities that attracted more investment compared to the same period of 2012. “South Africa has sustained democracy for close to 20 years and with it higher growth rates, solid employment creation and improvement in social and economic services for most people,” says Makgetla. She stresses that with democracy comes a commitment to real, if gradual, change. And it is only if the country lives up to that commitment, that it will establish a “positive investment climate or a cohesive and peaceful society”.

In 2012, FDI in South Africa fell just 3.9% compared to its Brics partners of Brazil, Russia, India and China, which experienced an average 20.7% decline.

In its submission for fDi Magazine’s report, Trade and Investment South Africa stressed the importance of the country’s attachments to its Brics partners. “South Africa’s participation in the Brics grouping is significant… as it provides important opportunities to build South Africa’s domestic manufacturing base, enhance value-added exports, promote technology sharing, support small business development and expand trade and investment opportunities.”

Nigeria and Botswana are the new entrants in the magazine’s top 10, ranking in seventh and eighth place respectively. Africa has experienced significant growth in the past decade. However, this must be viewed against the fact that its countries are expanding off a low base, with living standards and business environments taking longer to catch up to world standards.

“Yet this represents an opportunity for future growth. If the region continues in its efforts to tackle poverty, corruption, inadequate infrastructures and political issues, Africa’s competitiveness on a global scale can only get better,” reads the report.