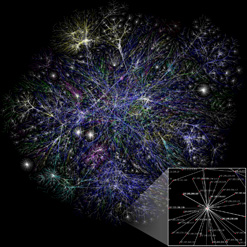 Partial map of the internet. Each line is
drawn between two nodes, representing
two IP addresses. The length of the lines
are indicative of the delay between those
two nodes.
(Image: Wikipedia)

The number of South African internet users rose to over 5-million in 2009, finally breaking through the 10% mark in internet penetration for the country, which has a population of 49.3-million.

This is the key finding of the Internet Access in South Africa 2010 study, conducted by World Wide Worx and jointly sponsored by Cisco. The headline data, released in mid-January, shows that the internet user base grew by 15% in 2009, from 4.6-million to 5.3-million, and is expected to grow at a similar rate in 2010.

“The good news is that we will continue to see strong growth in 2010, and we should reach the 6-million mark by the end of the year,” says Arthur Goldstuck, MD of World Wide Worx

Reshaad Sha of the Cisco Internet Business Solutions Group says that this can only benefit the economy. “A sustained growth in internet penetration is a key factor that will positively influence the economy of South Africa,” he says.

“The varied range of application services and social networking platforms used by local consumers has fuelled the uptake that we see today.”

Growth in the number of internet users in South Africa was relatively stagnant from 2002 to 2007, when it never rose above 7%. However, this rate almost doubled in 2008, and continued accelerating in 2009.

World Wide Worx found that the landing of a new undersea cable on the South African coast was only one of a range of factors behind the growth.

Of greater significance was the granting of Electronic Communications Network Service licenses to more than 400 organisations. This meant that service providers who were previously required to buy their network access from one of the major providers could now build their own networks or choose where they wanted to buy their access.

The result was that a market previously characterised by a limited range of providers and services suddenly exploded as small providers were able to repackage the services provided by the large telecommunications corporations in any way they wished. The large providers, in turn, began to offer far more competitive packages to both customers and resellers.

World Wide Worx found that a second key factor in growth over the past two years has been the continued uptake of broadband connectivity by small and medium enterprises migrating from dial-up connectivity. Each company moving from dial-up to ADSL, for example, extended internet access to general office staff. This process was found to add an additional one to 20 new users to the internet user base for every small business installing ADSL.

While the headline findings examine the general numbers of users, the final Internet Access in South Africa 2010 report, due to be released in March, will highlight the extent of new fibre-optic networks laid down across South African cities and between the cities. It will also examine the impact of the range of new undersea cables that will be in place by the end of 2011, and which is expected to enhance competitiveness even further.

“In the coming year, operators will begin to leverage the combination of new undersea cable capacity and new fibre-optic networks to supply corporate clients and resellers with bigger, faster and more flexible capacity,” says Goldstuck.

“Almost every large player in the communications industry has realigned its business to take advantage of this relentless change.”