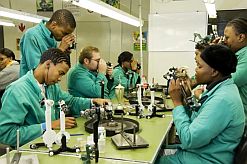 South Africa will soon be able to process more of its own diamonds, thanks to the new Matla Diamond Polishing Plant in the Eastern Cape province.

Speaking at the launch of the East London-based facility on 28 July 2010, Mineral Resources Minister Susan Shabangu said: “As a department, we want value added to our raw materials, making sure that our people get jobs and contribute to the economic activity of the country.”

The automated plant is equipped with technology worth R35-million ($4.7-million) from China, and is expected to be eight times more efficient than a similar-sized manual operation.

It will produce a maximum of 20 000 carats a month – this translates to R100-million ($13.6-million) in monthly revenue, according to the current market environment, said Matla Group executive chairperson Zwelakhe Sisulu.

Matla Group CEO Chia-Chao Wu said the company plans to train 150 to 200 South Africans to become cutters and polishers. At the moment there are 25 previously disadvantaged individuals from the Eastern Cape employed at the plant. A further 120 skilled job opportunities are expected to be created over the next two years and more than 500 in the next five years.

“I’d like to see this process of training translated into professionalism – a professionalism where these young people will be able one day to open their own factories,” she said.

The Matla Group has employed 25 Chinese nationals on a two-year contract to train local staff in diamond polishing.

“We really are going with great gusto into what we see as the knowledge economy, because in the world now, if you want to be competitive you have to have knowledge, skill and discipline as the basis,” Sisulu said.

Only 2% of local diamonds are currently processed in South Africa, with the remainder mainly being sent to non-diamond producing countries in the East. Sisulu said this was unfortunate.

Mcebisi Jonas, of the Eastern Cape’s Department of Economic Development and Environmental Affairs, agreed: “While South Africa remains a leading diamond producer, there is very little local polishing of rough stones. The bulk of these are exported for further polishing in countries such as India and China.”

This joint venture, together with the latest technology, will go a long way in increasing the country’s competitiveness in the diamond-polishing industry, he said.