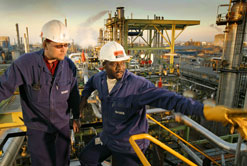 Workers at a Sasol plant. South Africans
are most optimistic about regular income,
with 66.2% of those surveyed for the
index expecting an increased wage.
(Image:
MediaClubSouthAfrica.com.
For more free photos, visit the image
library.)

The latest findings of the MasterCard Worldwide Index of Consumer Confidence show that South Africans are still optimistic about the immediate future of the economy, despite the looming global recession and local economic downturn.

The index is based on a survey that measures consumer confidence on prevailing expectations in the market for the next six months. South Africa fared very well: with 100 being the highest level of consumer confidence, South Africa scored 78.7. Although this score is five points below the score for the first half of 2008, it holds up well with South Africa’s historical average of 79.4.

South Africa also bagged the Middle East and Africa region’s second-highest score – only consumers in Kuwait were more optimistic about their market’s economy.

Dr Azar Jammine, director and chief economist at Econometrix, said that there are reasons to believe that the South African economy may not have been as hard hit as the rest of the global economy.

Jammine said another factor that could be contributing to a more resilient economy is the build up to the 2010 Fifa World Cup. The event will bring many benefits for small businesses and the tourism sector.

South Africans are most optimistic about regular income. When asked whether they expected their regular income, including bonuses and fringe benefits, to increase, remain the same, or decrease over the next six months, 66.2% of respondents expected an increase, whereas just 7.2% said that they expected it to decrease. This resulted in a score of 90.2.

Only 14.7% of the respondents said that they expected the economy in South Africa to become worse over the next six months, 56.5% expected economic performance to improve, and 28.8% thought it would stay unchanged. Overall, the economy received a score of 75.7.

Jac Laubscher, chief economist at Sanlam, said better financial conditions of consumers mean that the environment for all businesses operating in the consumer sector will improve. Laubscher said besides consumer confidence, it is also important to increase actual spending, as investors will base business and expansion decisions on the latter.

The South African survey focused on the three main urban centres: Johannesburg, Cape Town and Durban. Durban residents claimed first place as they were the most upbeat. Mike Schüssler, chief economist at T-Sec, explained that scores on all five individual indicators (employment, economy, regular income, stock market and quality of life) were up from both six months and a year ago.

Johannesburg’s overall consumer confidence scored 83.3. Schüssler said residents were particularly optimistic about the performance of the South African economy, as well as the prospect of increases in their regular income.

Cape Town came in last with a fairly bleak expectation, mainly due to its expectations of the South African stock market over the next six months. He said the fall in the financial market and a decline in tourism also contributed to a lower score.