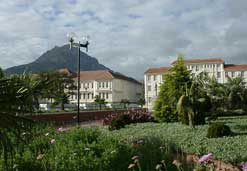 Business leaders looking to improve their skills can now benefit from a new partnership agreement between the internationally accredited Business School at Stellenbosch University in the Western Cape and the US-based Center for Creative Leadership (CCL).

This is not the first such partnership into which the University of Stellenbosch Business School (USB) has entered, as it already has well-established partnerships with over 50 top business schools in the US, Europe, South America, Australia and Asia.

However, the newest agreement sees the American institution setting up shop for the first time in Africa in partnership with USB Executive Development, a public company within the USB that focuses on public and customised programmes, strategic consulting, and leadership and organisational development.

Working with USB Executive Development, the CCL will offer its highly acclaimed five-day programme on leadership development, starting in August 2008. The programme, which accommodates a maximum of 24 students, is aimed at mid- to senior-level managers who wish to become more effective leaders.

This is achieved through an intensive programme of assessment, group discussions, self-reflection, small group activities and personal coaching. The goal is to produce more capable leaders who are willing to enhance their leadership abilities by listening to feedback from others and taking positive action accordingly.

The CCL has agreements with other institutions in Europe and Asia, as well as North America, and according to Kim Lafferty, CCL European regional director, has previously looked into establishing a presence in Africa. At the instigation of USB Executive Development CEO Frik Landman the channels were opened and the partnership sealed.

“With its focus on leadership underpinned by decades of research, the Center for Creative Leadership is unique among executive education providers,” said Landman. “When the deliberation around leadership is only an intellectual exercise, it serves none but the esoteric few. The laboratory of leadership is life and African life tests our leadership daily. I’m convinced that CCL will help us to tap into the vitality and spirit of our own emerging leaders.”

The CCL agrees. “When taking a closer look at most Africans’ day-to-day lives, one can see that possibilities and opportunities are either lost or forgotten simply because of a lack of leadership skill,” said the organisation’s Simon Rweyongoza, Project Manager for Africa. “Our work on the continent so far convinces us that our leadership programs can make a difference.”

“This will be the first time we run an open programme in Africa,” added Lafferty. “We have always looked at the region and wondered about the best way to have a presence there. Our partnership with USB offers us an easy way in.”

The partnerships that USB has already established have resulted in a number of collaborative academic programmes and research projects. The USB also engages in exchange programmes with its educational partners.

The USB is one of only two business schools on the African continent to receive the top rating of “universal business schools with major international influence” in the first Eduniversal survey of the world’s leading 1 000 business schools, released in early 2008. The other school is associated with the University of Cape Town.

The Eduniversal Official Selection positions schools according to universality, quality and international recognition. Deans of business schools from around the world were asked to recommend schools in various countries from an informed point of view, and thus were only required to vote on those they could recommend with authority. There were more than 4 000 business schools and universities under consideration. From 2008 onwards Eduniversal survey results will be released every two years.

The USB has since been granted membership of the European Doctoral Association in Management and Business Administration, and is the first, and to date the only non-European school to be admitted.

The CCL, meanwhile, has received a number eight ranking in the Financial Times‘ survey, released in May 2008, of the best executive schools around the world. This is the fourth consecutive top ten ranking for the institution on the survey.