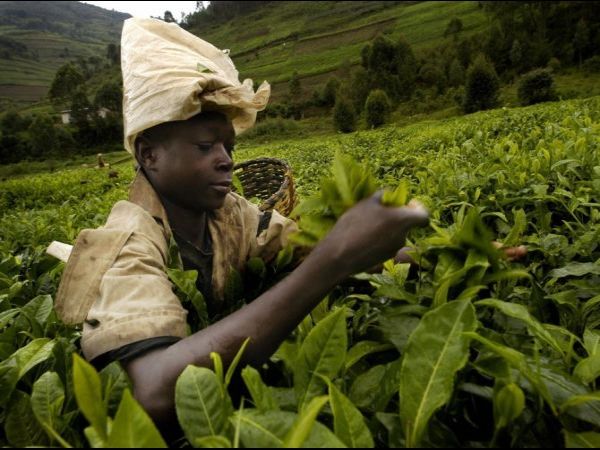 A Rwandan tea picker at the Mulindi tea plantation, in Byumba, Rwanda. Agriculture has been the main source of Rwanda’s economic growth. (Image: Global Post)

Rwanda has been making tremendous strides in its economy since the genocide that took place there 20 years ago, and has reduced poverty by a third.

On 6 April 1994, Rwanda plunged into a horrific civil war in which some 800 000 Tutsis and moderate Hutus were massacred in 100 days, making it one of the biggest and most efficient – and bloodiest – acts of genocide in the 20th century.

Although the country is still healing the wounds of those terrible days, it has taken some remarkable steps forward. It has reduced poverty, narrowed the equality gap, and increased per-capita growth almost five-fold, according to the World Bank.

According to the World Bank, Rwanda is now consolidating gains in social development and accelerating growth, while ensuring that they are broadly shared to mitigate risks to eroding the country’s hard-won political and social stability.

Vision for the country

“Rwanda’s long-term development goals are embedded in its Vision 2020, which seeks to transform Rwanda from a low-income agriculture-based economy to a knowledge-based, service-oriented economy by 2020,” reads the World Bank profile on the country.

Although the government has put in place a long-term vision for the country, it also has a short-term vision to get it there. According to the World Bank, the Economic Development and Poverty Reduction Strategy’s highest priority is growth acceleration and poverty reduction through its four thematic areas: economic transformation, rural development, productivity and youth employment, and accountable governance.

Although Rwanda has made progress by rebuilding the nation and building new infrastructure in the past 20 years, it will need to do more to make sure its vision is achieved. According to the World Bank, poor infrastructure and the lack of access to electricity and limited generation capacity are some of the major constraints to private investment. Some reforms have been implemented successfully to improve the business environment and reduce the cost of doing business.

In the 2014 Rwanda Doing Business Report by the World Bank, the country was among the 10 most improved economies in 2013 and the country is now ranked as the second easiest place to do business in Sub-Saharan Africa.

Excessive foreign aid is also seen as a hindrance to Rwanda’s progress as 40% of the country’s budget depends on it. “While Rwanda has been effectively using aid for development, the country remains vulnerable to fluctuations in aid flows. Starting in mid-2012, Rwanda experienced a sudden and sharp decline in aid.”

How the World Bank helps

According to the bank, through a three-phase Adaptable Program Loan, it supports the Rural Sector Support Project (RSSP), which focuses on intensifying production in the marshlands. It was followed by the LWH, which started in 2010. The latter is aimed at increasing productivity on hillsides and developing parts of these hillsides for irrigated horticulture production.