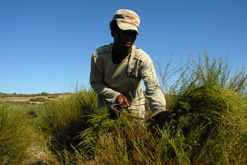 The Red Espresso drink with a distinct
crema layer makes it look like a coffee
although it’s made with a leaf traditionally
used for tea.
(Image: Kerry Walsh Photography)

The look, taste and health properties of a South African-invented beverage that’s neither coffee nor tea is causing quite a stir with lovers of both drinks.

Red espresso is made from rooibos, the uniquely South African plant that only grows on 250km of the earth’s soil in the Cederburg Mountains in the Northern Cape Province. The drink is made in the same method as an espresso – where the coffee is brewed by forcing extremely hot water through finely ground coffee. Although red espresso is made from a plant considered a tea, it bears the distinct characteristics of an espresso – such as crema, a crème coloured foam that appears on the top of an espresso.

The idea for the drink came in 2005, when Carl Pretorius, a firm coffee drinker, began realising the toll that the caffeinated drink was taking on his body. He began playing around with ideas and after months of sourcing the best rooibos and experimenting with preparation methods, he came up with a complimentary combination of a tea made like a coffee.

“Red espresso offers a healthy alternative to coffee without compromising on taste or style and satisfies my need for an authentic espresso experience,” says Pretorius. “I didn’t want to give up on the ritual and sophistication of coffee, but I also didn’t want to drink an ordinary cup of tea. Delicious, full-bodied, caffeine-free and even coated with crema, red espresso is my solution to having the best of both – good health and espresso style.”

The drink is caffeine free and contains five times the amount of antioxidants, which are said to help with a host of ailments like headaches, digestive problems and boosting the immune system.

In its three-year-existence, the drink has become available in coffee shops, restaurants and stores around the country and has debuted to wide acclaim internationally.  It is available in the US, Canada, Portugal, Denmark, Switzerland and parts of Asia.

In the first year of the drink’s launch in South Africa, more than one million cups of espresso were sold. This doubled in the second year and the product is now a staple in many homes and restaurants. Red espresso shines when made in an espresso machine or stovetop espresso machine but it can be made using other appliances like a drip coffee machine or percolator.  Like its coffee counterpart, red espresso can also be used to make lattes and cappuccinos.

Coffee connoisseurs and organisations that honour innovations have also taken notice. In 2006 it won the New Product of the Year Award at the 2006 SA Food Review/Symrise New Product Competition. The competition rewards innovative food that is true to South African eating trends as well as its accompanying marketing.

According to SA Food Review’s Brenda Neall, this is quite an award. “Reaching the finals of this competition, never mind winning it, takes some doing. Each entry goes under the beady scrutiny of its creator’s peers on the judging panel – including marketers, food scientists, dieticians, packaging experts, and a microbiologist. Apart from uniqueness, market demand for the product and its sustainability is carefully evaluated.”

At the World Tea Expo held in Las Vegas in May 2008, it was named one of the Top 10 Tea Products. Red espresso’s greatest achievement though is winning the Best New Product award in the Specialty Beverage Category at the world’s largest coffee show organised by the Specialty Coffee Association of America.

“As a South African company, bringing this award home feels like winning the World Cup. The coffee industry is huge and incredibly competitive. For us to get their endorsement is a major feat,” said Pretorius on winning the award.  “I am delighted that my invention has such global appeal. I also feel privileged to have such fantastic support and such talented people around me. It comes through in everything about red espresso.”

The farm from which the rooibos is sourced takes great pride in producing and harvesting the best quality leaves. Apparently, four generations of rooibos farmers have operated from this farm, rendering the current farmers experts on the subject.   The plant thrives in the high altitude, rocky soil and a very specific climate which cannot be mimicked.

Do you have any comments or queries about this article? Email Tamara O’Reilly at tamarao@mediaclubsouthafrica.com. 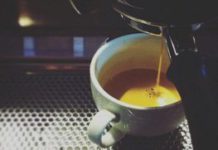 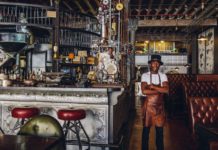 Telling the truth about coffee 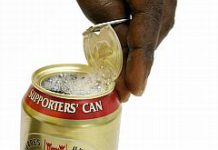 Coke to give schools safe water 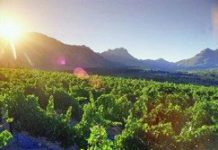