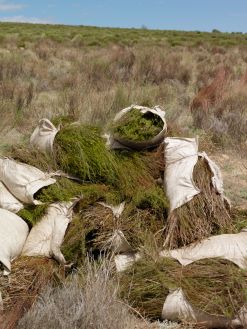 Rooibos is indigenous to the Cedarberg
region, north-west of Cape Town. This
is the only place in the  world where
Rooibos grows naturally.
(Image: SA Rooibos Council) 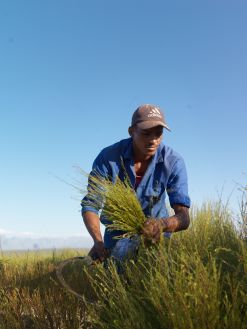 The rooibos industry is a major employer
in the Cederberg and surrounding areas.
The industry is labour-intensive and
provides about 4 500 jobs.
(Image: SA Rooibos Council)

The South African Rooibos Council is participating in an international project to improve the export competitiveness of rooibos, one of the country’s most well-known products.

The project is a combined effort between the SA Rooibos Council and the International Trade Centre – a joint agency of the World Trade Organisation and the UN. Funding for the project is provided by the government of The Netherlands.

“We are delighted that international funders see the potential to take the rooibos product further,” says Soekie Snyman from the Rooibos Council.

South Africa is the world’s only producer of rooibos, which is a unique selling point of the product. Classified as a herb, rooibos is part of the fynbos family of plants found in the Cape Floral Kingdom, one of only six recognised floral kingdoms of the world.

Used mainly as tea but available in a wide variety of other products, rooibos is indigenous to the Cederberg region north-west of Cape Town and will only grow in this area. The region’s hot and dry summers, winter rainfall and coarse sandy soil provide ideal growing conditions for the hardy rooibos plant.

According to the SA Rooibos Council, 72% of South African households buy rooibos tea and sales are increasing at about 5% a year. While the value of exported tea has increased by an average 26% year-on-year between 2005 and 2009, more than 90% of rooibos is exported in bulk, with little value added.

In 2007 the world’s largest flavour company Givaudan named rooibos as one of the flavours to watch in its annual FlavourVision forecast. Since then, rooibos has gone from being a flavour to watch to a local and international beverage of choice.

The research initiative will help the industry to think more creatively about marketing the sought-after herb.

“To sustain the growth we’ve achieved over the past 12 years we have to continue developing the domestic market as well as assess new opportunities to expand exports,” says Martin Bergh, chairman of the SA Rooibos Council.

Currently about half of the 12 000 tons of rooibos produced annually is exported, mostly to Germany. According to Snyman, Germany buys and sells the largest quantities of herbs such as rooibos. “It is the international herb trading capital of the world,” she says.

Rooibos is exported to more than 30 countries. Germany, The Netherlands, Japan, the UK and US are the biggest importers.

In addition to the opportunities for value adding, the rooibos industry is a major employer in the Cederberg and surrounding areas. The industry is labour-intensive and provides about 4 500 jobs.

The South African government has recognised this as one of the focus areas in its Industrial Policy Action Plan – by promoting the exports of added-value rooibos products, jobs in the sector will be better protected.

Taking these factors into account, the goal of the initial six-month project is to conduct an in-depth analysis of the structure and pricing of the German rooibos market. The findings will help the industry to identify new opportunities and market segments.

Snyman says that rooibos is a versatile product that is used extensively in the manufacture of products such as pet skincare ranges, alcoholic liqueurs, rooibos-smoked butter, salad dressings, yoghurt, jams, jellies and biscuits.

Rooibos is also a favourite ingredient in experimental cuisine. At the Twelve Apostles Hotel in Cape Town, which recently made it onto the Condé Nast Traveler Magazine listing of the 80 best new hotels in the world, you can enjoy rooibos ice-cream as part of their fynbos-inspired menu.

Although value adding is important, Snyman says that the main focus of the industry is still tea. “There is a growing market trend for speciality teas. In South Africa, the speciality tea market is still small, but it’s growing fast,” she says.

Besides its sweet flavour, another reason for the increasing popularity of rooibos is the proven health benefits.

The SA Rooibos Council has invested more than R2-million (US$252 000) in independent scientific research to determine the benefits of rooibos. It is funding six projects at several local universities and science councils, focusing on how rooibos can counter cancer and stress as well as the link between rooibos and exercise. A project on rooibos and obesity is also underway.