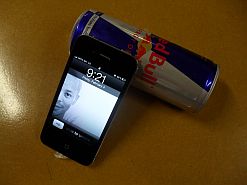 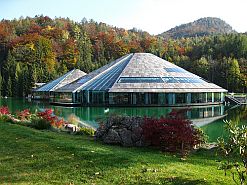 Red Bull headquarters are situated in
Fuschl am See in Austria and take the
shape of two volcanoes, symbolising
power and energy.
(Image: Flickr)

Energy drink giant Red Bull will soon launch a mobile virtual network operation (MVNO) in South Africa, becoming the second player to do so after Virgin Mobile established itself in the country in 2006.

The new South African venture will be a partnership between the beverage company and mobile network operator Cell C.

The MVNO will be officially launched in Johannesburg on 8 February 2011. Details over pricing and the network’s range have yet to be confirmed.

Red Bull Mobile has already established MVNOs in Switzerland, Hungary and Austria, and will be launching in Germany soon.

It will join Virgin Mobile, of the Richard Branson-run Virgin Group, in utilising Cell C’s infrastructure.

Virgin Mobile, a 50-50 partnership between Cell C and the Virgin Group, have not been as successful as they’d hoped to be in South Africa, admitting that their initial aspirations were to gain a 10% share of the market. The group now says it will settle for 1%.

“Virgin Mobile banked on mobile number portability at its inception, but this did not pay off because South Africans are seemingly reluctant to change service providers,” said Spiwe Chireka of Frost & Sullivan, mobile-operator analysts.

In light of Virgin’s dwindled market share, Cell C is rumoured to be considering selling its stake in Virgin Mobile to mobile phone distributor Allied Mobile.

Despite the lack of market penetration by Virgin Mobile, analysts say they have faith in Red Bull Mobile.

BMI-TechKnowledge MD Denis Smit said: “It’s no longer good enough to bring in a player that is only trying to claw at (mobile phone) minutes. They must be able to provide value to subscribers on top of those minutes and Red Bull can do this.

“Red Bull is a marketing giant and can take advantage of promotion opportunities that come along with a niche mobile service.”

BMI-TechKnowledge is a commercial and industrial research company.

Andrew Snead, who works closely with Cell C and is a senior partner at telecoms consulting group Delta Partners, said: “For an MVNO to work anywhere in the world, it needs to have a clear value proposition.

“MVNOs can offer something different but they have to keep the economics in mind. They must offer unique value to customers, perhaps by providing discounted tariffs, or offering value-adding content.”

Red Bull was created in 1984 by Austrian entrepreneur Dietrich Mateschitz, who had become aware of the growing popularity of energy tonic drinks in Asia.

Today, Red Bull’s headquarters are based in Fuschl am See, Austria, and are built to resemble two volcanoes symbolising power and energy.

After developing a unique marketing campaign, Mateschitz began selling his product Austria in 1987, and the brand soon took off.

Nearly 4-billion cans of Red Bull are consumed every year.

Cell C was launched in South Africa in 2001 as the country’s third mobile network operator. Nowadays it has just over 6-million users.

In November 2010 the operator introduced its much-anticipated internet network.

Cell C’s CEO Lars Reichelt said at that launch: “It’s a high-speed packet access plus (HSPA+) with more bandwidth speed than that offered by other operators.” Other operators use only HSPA, making Cell C’s network faster.

Cell C’s internet network has access to a 1 600km fibre-optic cable and 2 000 transmitters. It’s been working with companies like Neotel, Dark Fibre Africa and Nokia Siemens Networks to improve its functionality.