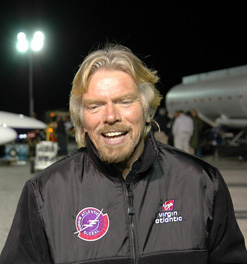 Branson with some of the students from
the Branson school of Entrepreneurship.
(Image: Virgin Unite)

Top entrepreneur and head of the Virgin Group Richard Branson has encouraged young South Africans to not be afraid of reaching for their highest dreams.

The business mogul was addressing youngsters at the Branson School of Entrepreneurship on 10 January during a prize-giving ceremony.

Branson said the youth in South Africa had to shake off the mentality of the past. “South Africa has been oppressed for decades,” he said, adding that he was aware that young people in the country did not have enough role models growing up.

The school’s students invited Branson to attend the culmination of their own internal competition to find the institution’s best business proposal for a small business venture.

The overall winner of the competition was 29-year-old Sonwabile Mngenela from the Eastern Cape.

The young entrepreneur’s company Mngenela Promoters creates unique handmade ceramics. Mngenela has aspirations to join the global business market and could be well on his way with the R10 000 (US$1 000) prize money he received.

In addition to the cash prize, Mngenela will be offered business advice, “If he wants it,” Branson joked.

Mngenela has also been offered a spot at one of the world’s top business schools. Peter Callum, head of the Cass Business School in London, invited the young entrepreneur to join the school during its summer programme.

Mngenela’s love for ceramics is deeply rooted within his family. In fact, the entire family, from siblings to his 100-year-old grandmother, are active within his company.

The Umsobomvu Youth Fund is a government initiative aimed at helping young entrepreneurs in South Africa access funding to start their businesses.

During the event, Branson announced that next year’s winner will receive an additional $10 000 (R1 000) courtesy of an anonymous businessman who was impressed by the programme.

The Branson School of Entrepreneurship was established in partnership with CIDA University, South Africa’s firstly and only virtually free institution of higher learning.

At the opening of the school in October 2005, Branson was excited at the success that the school would reach in unearthing brilliant entrepreneurs.

“I am truly delighted to be opening the Branson School of Entrepreneurship at CIDA. It is my hope that the students learn, by studying companies such as Virgin and working with our staff, that taking a great idea and having the courage to run with it can build great 21st century businesses,” he said.

Together with CIDA’s founder Taddy Bletcher, The Branson School of Entrepreneurship was established to offer an intensive 18-month training programme for CIDA graduates.

The programme aims to launch 30 small businesses each year.

According to its website, the primary focus of The Branson School of Entrepreneurship is to:

Students are taught the finer points of business acumen, culminating in a business plan that they have to produce once they graduate.

The students are treated as business people and are offered a virtual office for use. The office is fitted with a desk, computer, telephone, internet access, as well as a meeting room and boardroom facilities.

During the 18-month long course, students receive coaching and mentoring and are given exposure to successful local and international entrepreneurs.

Students who show real potential to make it in the business world are provided with much-needed capital to start their small businesses.

The funding process is, however, very strict. The loan is only guaranteed to students whose business plans show evidence of sustainability and the ability to generate money.

The Branson School of Entrepreneurship forms part of the non-profit Virgin Unite Entrepreneurial Foundation of the Virgin Group.

The right man for the job

58-year-old British-born Richard Branson is one of the world’s most easily recognisable entrepreneurs.

Described as a daredevil, Branson is famous for his high adventure record-breaking attempts. But his life in the fast lane started from just humble beginnings.

He dropped out of school at age 15 and by the time he was 16 years-old, published a student magazine entitled Student.

In 1992, the Virgin Music Group, which consisted of the record labels, music publishing and recording studios was sold to EMI for R10-billion ($1-billion).

Branson continued expanding his business and in 1984 he started Virgin Atlantic Airways.

The Virgin Group now has over 360 companies listed under it, these include Virgin Active – a group of gyms in South Africa, which was taken over from the Health and Racquet group.

He also has companies in the train, holiday, banking, media, books, fleet, and soft drinks industries.