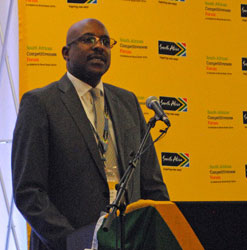 At a South African Competitiveness Forum discussion this week, delegates agreed that to make the country more competitive, it needs to market its pockets of excellence with more vigour.

The forum, organised by Brand South Africa, was held in Midrand, Johannesburg, on Tuesday, 5 November. Some 200 representatives from government, business, labour, civil society and academia came together to discuss the country’s global competitiveness and exchange ideas on how to improve it.

Keynote speaker Deputy President Kgalema Motlanthe said: “If we are to be competitive we must have in place sound economic policies; cultivate a favourable legal and business environment; roll out socio-economic infrastructure; constantly improve our trade and industrial policies and lower the cost of doing business.”

While admitting that South Africa had made good strides to position the country as a stable democracy with “the necessary institutions and mechanisms for providing an attractive and friendly investor environment”, he said the country had “fallen short of the development trajectory necessary to place us on par with many of our competitors”.

“As such, the sheer amount of work that still needs to be done requires that we – as government, business, labour and other social partners – continue to work together to address the challenges we face.”

Some of those challenges are “high rates of inequality, poverty and unemployment, especially amongst young people who constitute the majority of our population”.

The National Development Plan is government’s 2030 plan to stimulate growth, reduce unemployment and poverty, and narrow the inequality gaps still prevalent in the country.

In the manufacturing and related services discussion, it was agreed that one pocket of excellence is the mining sector, where South Africa has been a leader in innovation and deep level mining. The country’s motor industry is also one of its most successful, bringing skills into the country.

Manufacturing and mining’s contribution to gross domestic product (GDP) is 23%, down from 38% in 1986, according to Colin Coleman, South African head for investment management firm Goldman Sachs. The firm released its Two decades of freedom: A 20-year review of South Africa report this week.

South Africa’s GDP almost tripled over the 20-year period, from $136-billion to

Xolani Qubeka, CEO of the Black Business Council, said that those economies with a strong manufacturing sector experienced high growth.

In the manufacturing and related services discussion, several conclusions were reached to help the country achieve greater competitiveness:

• The country needs to boost exports, and work on import replacement.

• Create a culture of beneficiation, particularly in industries such as minerals (gold and diamonds).

• Shorten the decision-making process within government, to act quickly to secure deals and trade.

• Instead of waiting for strikes each year, business and labour should pre-empt them. Furthermore, labour and business should get together and approach government, to work together as partners.

• The country needs to consider whether its export culture is buoyant enough, with the correct markets having been identified.

• The rail network should be prioritised and brought up to standard.

• South Africa needs to figure out a way to sell itself to Africa.

• The country needs to have an integrated approach to manufacturing, for example, have the Council for Scientific and Industrial Research work more closely with industry.

• South Africans need to relook the relationship between SMMEs and large corporates and see where there could be more co-operation.

• The country should not allow competitors like China to undercut its manufacturing by copying an idea, then selling it in the local market for half the price.

• Don’t compete with giants like South Korea; do what the country is good at.

• Set up a strategy for trade with Africa, to increase the country’s visibility across Africa. Trade fairs and trade desks should be set up to encourage trade. Africa is a huge market for our products.

• Create opportunities to attract and retain talent. Diversification is essential.

• Develop a “can do” approach. South Africans must feel this is the land of opportunity.

• Execute the ideas South Africans have. The country is not short on them.

• Integrate with the rest of Africa to offer strong competition to China and India. And facilitate trade and travel between African countries, with perhaps a single visa.

“Our competitiveness ranking on global indices shows that we have become less competitive as a country. Global competition is at an all-time high and we need to up our game and become more competitive if we wish to continue being relevant in this global economy,” said Karthi Pillay, director at Deloitte Risk Advisory, and a leader in the manufacturing industry.

“The SA Competitiveness Forum, led by Brand South Africa, is a get-together of key minds in the country focussing on competitiveness issues to improving our global reputation and influx of foreign investment. As a firm that is seriously focused on assisting to improve the competitiveness of our country, Deloitte welcomes the opportunity to contribute and engage in conversation to achieve actionable outcomes.”