Ipap is meant to increase the competitiveness of the South African manufacturing industry and achieve structural development.
(Image: Department of Trade and Industry) 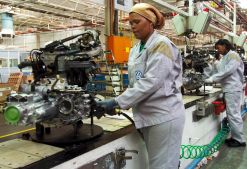 To reduce the high unemployment rate in Southern Africa, public and private stakeholders should turn to the manufacturing sector, which had the capacity to provide job opportunities for unskilled and semi-skilled workers – an idea debated at the Industrial Development in South Africa and Southern Africa seminar held at the Development Bank of Southern Africa (DBSA) headquarters.

The event, hosted by the Department of Trade and Industry (dti) and the Nepad Business Foundation, gathered people from public and private sector industry, who discussed the department’s Industrial Policy Action Plan (Ipap) and how it could accelerate Southern Africa’s dwindling manufacturing sector. According to the chief executive of the Nepad Business Foundation, Lynette Chen, the seminar, held on 26 July, looked into finding ways of harnessing Africa’s resources to improve the lives of its citizens. She said that though the continent was rich in minerals, it had some of the poorest populations in the world. “A lot of profit and wealth is exported out of Africa, which means real development is not taking place fast enough.”

For Kishan Pillay, the director of the dti’s industrial development division, the manufacturing sector was the key to rapid development and the reduction of unemployment, which was a significant motivator for Ipap. He added that manufacturing could create the demand for a huge range of upstream inputs and services. It was also central to a strong export strategy and had the potential to create employment for unskilled and semi-skilled individuals.

The South African economy had been driven by the consumption sector in the last two decades, Pillay said, which included insurance, transport and property. “Our key productive sectors like manufacturing and agriculture have contributed less to the economy than they are capable of doing. At the same time, we have lost a lot of manufacturing and productive capabilities.”

Malebo Mabitje-Thompson, the chief operating officer of the dti’s industrial development division, said one of Ipap’s objectives was to create a vibrant manufacturing sector that would allow South Africa to absorb its massive labour pool as well as create entrepreneurs who would create job opportunities for others.

Mabitje-Thompson advised role players to become knowledgeable about challenges in the industrial sector before conjuring solutions. “It would be very difficult to come up with interventions if you do not know what the problems are. They are not just experienced by [the] government but by the private sector, too.”

Pillay said some of these challenges included:

“The objective of Ipap is to achieve structural development and to increase competitiveness of South African manufacturing,” said Pillay.

Ipap would address these challenges by creating more effective financing for industrial development, he added. It would also reform procurement so as to ensure a larger proportion of infrastructure went to locally manufactured inputs. He pointed out that focus should be on new projects instead of existing ones. At the same time, companies had to be monitored and evaluated, and show they were meeting targets that would qualify them for funding.

For Ipap to work, Pillay said, it should not be undertaken by the dti only. Instead, all relevant government institutions should become familiar with the plan and activities related to it should be co-ordinated across all departments.

The plan could be successfully implemented if it was aligned with a supportive macro-economic and regulatory environment; appropriate skills and education systems that were combined with the needs of industry; sufficient, reliable and competitively priced modern infrastructure; and investment of various technological developments within the economy.

“Strategies are developed and strengthened through self-discovery,” said Pillay. “This is a learning-by-doing process. Every year we go through this process to improve Ipap, to make sure it is relevant and that it is working.”

In June 2011, South Africa hosted the Second Tripartite Summit with 26 African heads of state and government from the Southern African Development Community, Common Market for Eastern and Southern Africa, and the East African Community. It was here that the Tripartite Free Trade Area negotiations were launched.

The free trade area will open up a market that includes 26 countries, with a population of about 600 million and a combined gross domestic product of approximately $1-trillion (R9,9-trillion). It is made up of three pillars, namely market integration, industrial development, and infrastructure development. The dti is leading talks related to industrial development. If an agreement is reached, members will be able to trade without import tariffs or quotas. Moreover, it will allow goods and people to flow across borders more freely.

“There is a full-on agenda on trade facilitation which looks at how we deal with efficiency at the borders, with standards, differences amongst ourselves and tariffing and non-tariffing barriers amongst ourselves,” explained Mabitje-Thompson.

A large portion of Ipap involves regional integration between African countries. It is stated in the plan that from 2013 until the second quarter of 2014, the dti will work with development banks like the DBSA and the Industrial Development Corporation in channelling funds to productive sectors. It will also engage with regional banks to secure funding for manufacturers. The plan also emphasizes that the department will take the lead in developing skills and cross-border infrastructure, which includes a railway link between the Port of Durban and Democratic Republic of Congo.

South Africa is already leading the drive towards regional integration. According to the 2012/2013 World Economic Forum Global Competitiveness Report, South Africa is 38th out of 144 countries in terms of business sophistication. The criteria that make up this ranking include control of international distribution, local supplier quality and quantity, and production process sophistication.

The country is also ranked high on the World Bank’s ease of doing business index, coming in at 39th out of 185 states. Compared to other Brics nations, South Africa finishes on top, with China and Russia trailing at 91st and 112th, respectively. The poll takes into consideration 10 criteria, including the ease of starting a business, getting credit and electricity, investor protection, and cross border trading.