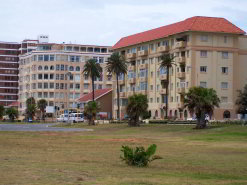 Property for sale along the city’s main
beachfront, like in these gracious old
mansion blocks, is quickly snapped up. 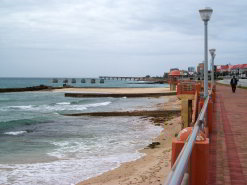 There is nothing that comes close to property when you’re looking for a good investment – but in tough economic times, you may need to sit on it for a while.

At just 28 years of age and with only five years’ experience in the real estate industry, Rademeyer was recently named the Nedbank Property Association’s Property Professional of the Year for 2009/10, beating 15 other finalists from among the country’s more than 40 000 registered estate agents.

He was the only Eastern Cape candidate for the award, and the only independent estate agent among the finalists, all the others being from the country’s large property groups.

For the year under review for the awards, ending February 2010, Rademeyer sold more than 100 properties in Port Elizabeth and the immediate surrounds, with a turnover of about R100-million (US$14.33-million).

The judges considered aspects such as sales and turnover, service ethics, client satisfaction, professionalism, community involvement, marketing and innovation, and commitment to education and leadership, he says.

Winning the title was made all the sweeter for Rademeyer by the fact that he had twice previously been a finalist for the award, in 2007 and again last year.

He believes he owes his professional success to his “intuitive style and passion for all aspects of the property  business” which have enabled him to “adapt to the changing market dictates of an industry facing tough challenges in the difficult economic climate of recent years”.

Indeed, at a time when many agencies were cutting back on advertising to reduce costs, Rademeyer bravely launched an aggressive and highly visible marketing campaign, stamping the Jaco Rademeyer brand on the local property scene.

Situated on the country’s south-eastern coast, the city forms part of the Nelson Mandela Bay Metropole, along with the inland towns of Uitenhage and Despatch. Lapped by the clear, warm waters of the Indian Ocean and known for its friendly, laid-back lifestyle, it is South Africa’s second-largest city in terms of area and fifth largest in terms of population.

Rademeyer is not the only one helping to put Port Elizabeth firmly on the national property map.

Local estate agent Debbie Epstein, who specialises in sales in the city’s main beachfront area, recently achieved second position for number of sales and fourth position for value of sales for the year up to March 2010 in the Harcourts property group’s national awards.

Epstein competed with more than 600 sales consultants from 120 Harcourts offices around the country, including the larger cities of Johannesburg, Durban and Cape Town.

She has been with the company for the past decade and claims to have consistently sold property worth more than R40-million ($5.73-million) a year – a remarkable achievement given the small area on which she focuses. Although, she explains, the more limited purchase options often mean that any available stock is snapped up faster than in the bigger coastal cities of Cape Town and Durban, where buyers have more choices.

In a case of swings and roundabouts, the tough economic climate is forcing some owners to part with holiday properties along Port Elizabeth’s stunning beachfront, providing keen buyers – some of them with millions of rands for a cash purchase – with more options.

New buyers in the area include medical and other professionals moving to Port Elizabeth to take up positions in the city, parents seeking accommodation in close proximity to Nelson Mandela Metropolitan University for their student children, and canny investors looking to acquire properties to take advantage of the student rentals market, Epstein says.

She agrees with Rademeyer that while interest from would-be buyers – including out-of-towners using  the internet for their property search – has definitely picked up again after the global slump, many potential purchases are still being scuppered by the banks’ high deposit requirements and strict lending criteria, and buyers’ understandable fear of a long-term financial commitment in these still uncertain economic times.

But she has great confidence in the city as an investment area for buyers, both local and from further afield.

“Port Elizabeth has it all,” she says. “It offers great opportunities, whether your need be for residential, holiday or industrial property.”

Equally confident of the city’s attraction and value for buyers is Kobie Potgieter, owner broker of RE/MAX Independent Properties in Port Elizabeth, part of the RE/MAX International property group.

Herself a former winner of the Nedbank Property Professional of the Year title for 2008/09, and previously RE/MAX International’s top-earning agent in the world (excluding the US and Canada) in terms of commission paid, Potgieter believes Port Elizabeth offers more potential for capital growth in the property market than any other city in South Africa, with larger centres like Johannesburg, Pretoria, Durban and Cape Town “having already reached their ceiling”.

Port Elizabeth has not yet reached its full potential, she says, and further investment and development will be driven by the deep-water harbour at the port of Ngqura and the opportunities offered by the adjacent Coega industrial development zone.

“The city is poised for major growth in the residential, industrial and commercial areas,” she says. “The investment by major organisations in Port Elizabeth is proof of their confidence in the city.”

Potgieter recently sold a lifestyle property in the coastal area of Lovemore Park, on the outskirts of the city, for an area record price of R10-million ($1.43-million). She believes this tranquil and verdant area will be another growth point for the city, as it offers large pieces of land suitable for the development of up-market residential and lifestyle estates similar to the Zimbali residential and resort estate on the KwaZulu-Natal north coast.

Looking to the immediate future for a property market that is only now beginning to recover after having been hard-hit by South Africa’s first economic recession in 17 years, Rademeyer says that although there has been quite a turnaround from even just six months ago, he expects the market to remain stagnant for some time to come.

While the Eastern Cape is becoming more enthusiastic and people “are at least signing again”, many prospective buyers are unable to meet banks’ stringent requirements for lending. “The market may be alive again, but there are no fireworks yet,” says Rademeyer.

His words of advice for anyone wanting to invest in the property market at the moment? “Commercial property remains a sound investment.”

According to Ian Olivier of Ian Olivier Properties and regional chairman of the Institute of Estate Agents of South Africa, property investments in the Eastern Cape are often driven by the many and diverse opportunities the province offers. Topping the list are some of the country’s most beautiful beach property and the accompanying relaxed, outdoor lifestyle, with Port Elizabeth being positioned as the country’s water sports capital.

But the Eastern Cape’s charms also include magnificent inland scenery, from the mountains and forests of the Amatole region to the vast, arid plains of the Karoo. Historic and attractive towns such as Graaff-Reinet, dubbed the Gem of the Karoo, stunning natural splendour, malaria-free Big Five game reserves, and friendly locals with hearts as big as the expansive Karoo sky all add to the province’s melting pot of attractions.

Olivier warns that the recovery in the property market will not be immediate or quick, but says there are many opportunities for astute purchasers who are in a position to capitalise on the current conditions that favour buyers.