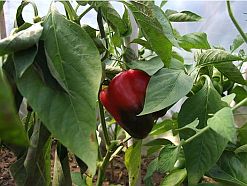 The paprika bush, a relative of the chilli,
is about to transform the fortunes of
Keiskammahoek farmers. (Image: Flickr)

International food and home care manufacturer Unilever and the Development Bank of Southern Africa have teamed up to launch a multimillion-rand paprika farming project in the small farming community of Keiskammahoek, one of the poorest corners of the Eastern Cape in South Africa.

Situated about 80km inland from East London, the community numbers about 150 000. Some 80% of them are unemployment – an appalling 120 000 impoverished people are desperate for hope. Now the paprika project, called Sidalukukhanya (isiXhosa, meaning “create light and hope”) is living up to its name by providing sustenance for 200 families already.

Only 60 hectares of paprika (Capsicum annuum) have been planted so far, and expectations are high that as the acreage expands so will the number of people that are able to eke out a realistic living from the soil. Around two-million seedlings took root during the first phase and there are plans to increase this within three years to four-million, which is expected to bear a bounty of 300 tons of paprika.

Harvesting began in February 2009 and processing of the spicy chilli relative will continue until May. The paprika project is soon due to take delivery of three driers, which will be fuelled by the burning of alien plants in the vicinity. Once ready for further preparation, the herbs will be taken to Unilever’s Robertsons Spices plant in Durban.

The Development Bank (DBSA) has invested the substantial sum of R11.4-million ($20-million), to be disbursed over three years, mostly for training in both agricultural and business matters. Sidalukukhanya is just one of several short-, medium- and long-term projects initiated by the DBSA to provide poor communities, particularly in rural areas, with income-generating opportunities.

DBSA CEO Paul Baloyi remarked that the long-term capacity of municipalities in agricultural areas depends largely on the success of the rural sector. “The role of agriculture and related industries is central to local economic development within rural South Africa,” he said, adding that giving emerging farmers the support to successfully grow high-value crops will enable them to cross the divide between subsistence and commercial farming.

Unilever has not only supplied the seedlings but has made a commitment to buy all the paprika Sidalukukhanya can produce, provided it meets quality standards. This will protect the harvest from market fluctuations, thereby securing a sustainable income for the farmers.

Unilever chairman Gail Klintworth said that multinationals have an important role to play in growth and development, as they are important generators of local income and jobs. Big companies introduce new technology and best business practices into areas where they operate. “But we also recognise that we can have broader social, economic and environmental impacts, both positive and negative,” said Klintworth.

Bringing tourism to the region

The project is managed by the Siyakholwa Development Foundation, which will also facilitate the community involvement. Siyakholwa director Brian du Plessis said he hoped that there would be more spin-offs for the region in terms of tourism.

“Our hope is that Keiskammahoek could become a tourist hub,” he commented. “Visitors to Hogsback, which is just 15km up the mountain, could break their journey here and samples of soaps and various other products from our existing essential oils project, as well as paprika, could be made available for purchase.”

Other partners include the Eastern Cape agriculture department which has supplied irrigation infrastructure, and the Amahlathi municipality.

In addition, the Fort Cox Agricultural College and Fort Hare University‘s agricultural department have both provided technical support. Agricultural interns from the two institutions have joined the project and work side-by-side with farmers in the fields, resulting in a two-way skills and knowledge transfer. So far the project has created jobs for 218 people in the community (97 women and 121 men), including 45 farmers and 11 interns.

A model for land reform

If successful, Sidalukukhanya will hold important implications for South Africa’s struggling land reform programme. The programme has seen the country’s formerly thriving agricultural sector slump as new farmers, struggling with inadequate skills and little support, allow fertile land to lay idle. However, minister of agriculture Lulu Xingwana said early in March that the government will address this situation by reclaiming any unproductive land allocated under the programme.

According to Klintworth, the land reform programme might benefit from the model rolled out at Sidalukukhanya, should it be as successful as hoped. “One of the issues we’ve got is that very often when farms are transferred, they’re transferred in a space where there are no skills. A commercially viable concern doesn’t automatically continue being commercially viable.”