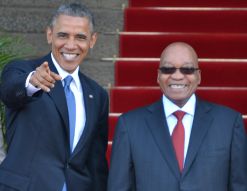 US president Barack Obama’s visit to Africa is a reassertion of America’s presence on the continent, say economists. Here he stands with South African president Jacob Zuma.
(Image: Shamin Chibba) 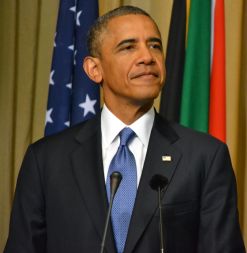 On his six-day tour of Africa, US president Barack Obama talked about increasing trade and accelerating economic growth, but his mere presence may have sent another message; that despite China’s increasing presence on the continent, the US is still here and it still wants to do business with Africa.

This is according to Catherine Grant-Makokera, the head of the economic diplomacy programme at the South African Institute of International Affairs (SAIIA).

She believes that Obama’s visit is a way for the US to reassert its position as Africa’s dominant trade partner. “They have been a big presence in Africa before and they are trying to say: We are still here.”

Grant-Makokera said one of the major benefits of Obama’s visit was that it drew the attention of American investors.

Dr Martyn Davies, the CEO of investment advice firm Frontier Advisory, agreed, saying multinational companies are starting to seriously consider Africa as an investment option. “They are looking for growth and Obama’s visit raises awareness of Africa amongst US corporations.”

In Cape Town, the US president unveiled his $7-billion (R70.4-billion) “Power Africa” plan to double access to electrical energy for six African countries including Ethiopia, Ghana, Kenya, Liberia, Nigeria and Tanzania. But according to the International Energy Agency, the funding would not be enough. It said that sub-Saharan Africa would need more than $300-billion (R3-trillion) for universal electricity access by 2030.

But Grant-Makokera remains optimistic about Obama’s plan, saying that it could attract more American investment into the continent. “We will have to see how much initiative it will unlock for private companies wanting to invest here.”

Davies said the plan is an indication of the North American country’s ability to direct capital in a non-commercial fashion. “Unlike Europe, which is all about providing aid, the US is giving hard cash and starting initiatives for developing infrastructure.”

In March this year, just weeks after succeeding as Chinese president, Xi Jinping went on a three-nation tour of Africa. Two of those countries were Tanzania and South Africa, which were also on Obama’s itinerary.

Financial Times columnist Edward Luce argued that the US was “late” when it came to addressing Africa. He referred to the UN Conference on Trade and Development, which stated that trade between China and Africa had increased tenfold since 2000 to just under $170-billion (R1.7-trillion) in 2012. That is more than twice the dealings between the US and Africa. Luce wrote that China had more than 150 commercial attaches in sub-Saharan Africa while the US had just six.

According to the SAIIA statistical report on South Africa-US trade, the Americans were the country’s biggest export market in 2001. Last year, the US was second to China, as it imported 8.7% of South Africa’s goods. The motor industry accounts for the bulk of South Africa’s exports to the US.

In turn, South African imports from the US had dropped from 2001. Though the number of goods coming in has increased, the percentage in the US’s total trade with South Africa has decreased. This is because of larger trade with China, India and other African states, said SAIIA.

But Davies is not fazed by these statistics. He believes the US is still the largest economy in the world and will remain so for many years. Therefore, he said, any trade with the country would be extremely beneficial.

Davies added that Obama is looking to counteract the Chinese approach to investment in Africa, which is heavily focused on infrastructure building through Chinese companies. “There are some people saying the US is far behind when it comes to Africa. But the question we should ask is: Who is winning Africa?”

One way to determine who is on top, Davies suggested, is by looking at shareholder value. In the US, millions of shareholders would see a return on investment whereas Beijing is the only beneficiary of Chinese investment.

Media is abuzz with the term “Africa rising” and indeed it may be true. Grant-Makokera said Africa is the second-fastest growing region in the world. And Obama stated in his press brief at the Union Buildings, Pretoria, on 29 June, that six of the 10 fastest growing economies are on the continent.

Grant-Makokera indicated that high GDP levels in Angola and Ghana are an indication of growth that is taking place. But she added that both economies are based on oil, a high priced commodity. She said that markets not exporting oil are not seeing the same results.

With this in mind Grant-Makokera said it will be a long time before we see the social benefits from large scale investments such as Power Africa and Trade Africa, the latter launched by Obama in Dar es Salaam, Tanzania, on the last leg of his trip. Trade Africa aims to double intra-regional trade in East Africa and increase exports to the US by 40%.

“You are only rising when your people are rising,” said Grant-Makokera. “Perhaps it can be seen as a relative statement as the rest of the world is stagnant but Africa is still growing.”

For Davies, “Africa rising” is just a buzz term and the continent is not experiencing any upsurge as it is claimed. “Africa is heterogeneous and fragmented. If you are living in Malawi, Niger or the Congo, then no, it is not rising.”

At their meeting on Saturday, South African president Jacob Zuma asked Obama to extend the African Growth and Opportunity Act, which had benefited the continent since its inception in 2000. It allows African countries to export goods to the US without having to pay tariffs. As a result, African products are more competitive in the US market.

If Obama agrees to extend the Act, Davies said it would lift the continent even further.

But extending the Act may not be worthwhile in five years’ time, said Grant-Makokera. Global trade tariffs are being reduced and the US is entering negotiations on free trade with Asia and countries in the EU.