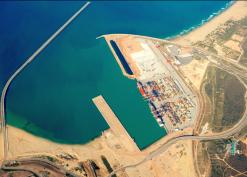 The Port of Ngqura, seen here from above,
complements the existing deep-water
ports at Richards Bay and Saldanha.
(Image: Port Strategy)

Ngqura, already the biggest port of its kind in sub-Saharan Africa, will be further developed in the next seven years in order to improve South Africa’s international maritime connectivity.

“The development of this port is not a once-off local event, it reflects the long-term vision and economic plan of the government of South Africa,” Zuma said.

“The port is a key infrastructure project, given its location and potential, and its launch is another step forward on a journey of economic development and transformation.”

The president was speaking at Ngqura’s official opening on 16 March. Although it’s been operating since October 2009, the port has already exceeded its operational targets fourfold.

With the planned development, by 2019 Ngqura’s handling capacity will have increased by two million containers a year, Zuma promised.

With its strategic position in relation to the BRICS countries of Brazil, India and China, Zuma believes Ngqura will become a major conduit for trade to and from other countries.

“In time this region will be well positioned as a key trade corridor linking South East Asia with Africa and the Americas,” he said.

Zuma used the opportunity to assure the Eastern Cape, the country’s poorest province, of the government’s serious intention to bring it into the mainstream economy.

“The province’s fear of not being taken seriously, of being neglected and forgotten, is in the past. The Port of Ngqura is part of a larger infrastructure plan for the country. It is an occasion to celebrate.”

In his State of the Nation address earlier in the year, Zuma announced that 2012 would be the year of infrastructure development, using the management expertise gained from hosting the hugely successful 2010 Fifa World Cup and the successful launch of the Gautrain, South Africa’s first rapid-rail service.

Five development corridors have been singled out for major investment in rail, road, water and electricity.

The Eastern Cape is one of these, with the planned new South Eastern node connecting the region with the Northern Cape and KwaZulu-Natal. According to Zuma this will help to improve the industrial and agricultural development and export capacity of the Eastern Cape and expand the province’s economic and logistics links with these two provinces.

A rail link has already been completed between the province of Gauteng and the Port of Ngqura.

Ngqura will be a key development node for freight transport company Transnet, with the majority of the utility’s capex expansion budget earmarked for capacity building at the port.

Transnet recently announced its market demand strategy plan, in which it projects that it will triple its capital investment programme to R300-billion (US$39-billion) in the next seven years. About R100-billion ($13-billion) is intended for expansion projects at various ports.

Transnet has spent R10-billion ($1.3-billion) on basic infrastructure in Ngqura, and created 15 000 jobs during the construction phase alone. The port employs 600 people, with numbers set to grow to just under 1 000 in the next financial year.

Between now and 2019 the port will increase the number of container berths from the existing two to four and improve its container handling capacity with the acquisition of additional cranes. Already it boasts six mega-max ship-to-shore cranes and 22 rubber-tyred gantry cranes and averages 29 gross crane moves an hour, a key measure of productivity for ports.

About 31 container vessels dock at the port each month.

A liquefied natural gas facility and Transnet’s manganese export facility will be relocated from Port Elizabeth to Ngqura and two manganese smelters are earmarked for development by 2016.

According to Public Enterprises minister Malusi Gigaba, the nearby Port Elizabeth harbour will continue to focus on the automotive industry and clean cargo, such as containerised goods. The government is also in discussions with the Nelson Mandela Bay Municipality about the creation of a waterfront and leisure plan, he said.

Zuma used the occasion of the opening to reiterate that there would be a R1-billion ($130-million) rebate on port tariffs for local exporters of manufactured goods, “to make doing business in South Africa easier”.

He first mentioned the rebate in his State of the Nation address, saying the decision emanated from talks with the automotive industry in the Eastern Cape during his presidential visit there in September 2011. The automotive industry had raised the issue of high port tariffs as an inhibiting factor to further economic growth and job creation, especially as the local industry is competing in an open and extremely competitive market.

The port rebate will come into effect on 1 April this year, with details to be announced by Transnet group CE Brian Molefe later this month.

According to Zuma, there will also be increased economic benefits to those businesses wishing to invest in the Coega Industrial Development Zone, adjacent to the port. One such investor is First Automobile Works (FAW) of China, which turned the first sod for its R100-million ($13-million) truck assembly plant at  Coega earlier this month.

“The FAW investment confirms the potential of this zone to attract foreign investment and to create jobs,” Zuma said.

The plant will produce 5 000 truck units a year and will employ about 1 000 local workers by the time the first vehicle rolls off the assembly line at the end of 2013.