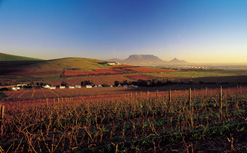 Vineyards in the Durbanville Wine Valley
in the Western Cape, with Table Mountain
in the distance. South Africa’s wine
exports rose 32% in volume and 42% in
value from 2007, to 45.2-million cases
valued at $780-million (R6.1-billion).
(Image: MediaClubSouthAfrica.com. For
more free photos, visit the image library)

South Africa is one of five wine-producing countries to join forces to form the New World Wine Alliance. The alliance plans to challenge European Union (EU) rivals under this banner. Europe is currently the world’s largest wine producer and exporter.

So-called New World wines are produced outside the traditional European wine-cultivation areas in countries such as South Africa, Argentina, Chile, the US, New Zealand, Mexico, and Australia, which is the current market leader in the UK.

The new alliance includes South Africa, New Zealand, California, Chile and Argentina – all of which will use their partnership as a marketing tool to further penetrate the global wine market and see off competition from European countries.

This does not negate the fact that the five countries are still competitors in the market, but an alliance spokesperson said that all members will ultimately gain by sharing experience and best practice.

“We have already benefited from each other enormously by exchanging viticultural and cellar research as well as innovations in packaging, marketing and logistics,” said the spokesperson.

The group will be officially launched at the next Prowein international wine and spirits trade fair, taking place over three days in Düsseldorf, Germany, in March 2010. In a world first, they will also exhibit their wines there as a joint force.

The annual wine showcase, one of the most important trade shows on the wine calendar, attracted around 3 000 exhibitors in 2009, along with about 35 000 delegates and visitors from some 50 countries. Press coverage was extensive, making Prowein the ideal platform to launch the new wine alliance.

Not only will the partners be exhibiting at the same pavilion, but together they will hold talks, seminars, presentations and workshops with relevant experts in the field.

The pavilion’s theme, Down to Earth, suggests the main issues to be covered: sustainable wine production, management of scarce natural resources, management of climate change, cool-climate viticulture, organic wines, as well as market-related topics such as branding, building consumption sales, and icon wines, or wines of exceptional quality.

Australia has not joined the alliance because it has shifted its focus to the East. China is the world’s biggest single wine market in terms of population, as it is for beer, and the demand there for wine is growing. It is also the world’s sixth-largest wine producer.

Meanwhile, the New World Alliance will stand together as a unit to rattle EU winemakers. In 2006 the EU proposed a shake-up of its wine sector, prompted by growing competition from the New World, dwindling wine consumption in the region, and a fear that imports would eventually outstrip exports.

New regulations were adopted by the EU Council of Ministers in April 2008, and are set to revamp the way the EU wine market is managed. The main focus areas are the reduction of the large quantity of unsold wine, which a few years ago was the equivalent of an entire year’s production, and the productive reallocation of funds to boost the competitiveness of European wines.

For instance, the EU plans to stop paying producers for surplus cheap table wine and will instead divert this large slice of the EU wine budget into producing and marketing quality wines.

The five partners of the alliance have all seen recent growth in exports despite the world-wide recession, and will continue to focus their efforts on the promotion of the New World as a source of top-quality wines and oenological innovation.

Elsewhere in the southern hemisphere, Argentina’s 23.8-million cases exported were an increase of 14% in volume and 28% in value from 2007, and Chile’s exports rose 10% in value but decreased 3% in volume. Nonetheless, the 65.4-million cases were worth $1.4-billion (R11-billion).

New Zealand saw 10.9-million cases leaving the country, an increase of 19%. The Antipodean country is famed particularly for its Sauvignon Blanc, and in June 2009 the country’s Nobilo Marlborough Sauvignon Blanc became the top seller of its kind in the US.