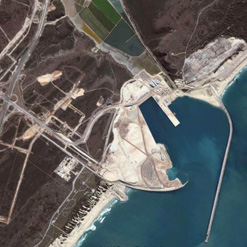 A satellite image of the deep-water Port of
Ngqura, and the surrounding
infrastructure of the Coega Industrial
Development Zone.
(Image: Google Earth)

The port is an integral part of the Coega Industrial Development Zone, a new initiative that aims to boost the regional economy of the Eastern Cape province.

The 300-metre long and 13-metre deep ship was used to test vessel operators’ skills in offloading and handling containers. After months in training, two teams of operators – with a third on standby – succeeded at their first commercial offloading, using the port’s state-of-the-art Liebherr ship-to-shore cranes. The MSC Catania loaded and off-loaded 275 containers, with an average of 19 containers handled per hour.

“We are pleased to report that it was all smooth sailing today in terms of portside operations at Ngqura,” Tau Morwe, chief executive of Transnet Port Terminals, said after the inauguration on 4 October.

“This experimental start-up indicates we are ready to take the port to the next level.” Transnet Port Terminals is a division of Transnet, the parastatal company that runs South Africa’s national transport infrastructure.

The Ngqura Port, which lies at the mouth of the Coega River in Algoa Bay, is the country’s eighth and latest commercial port development.

It has an advantage over other ports in Africa in that it is a deep-water port with a depth of between 16 and 18 metres. This means it can accommodate new generation container vessels and will allow Transnet to increase capacity for container volumes.

The improved infrastructure will relieve container congestion in the South African port system, while attracting additional transhipment cargo. Transnet says the new port is the solution to South Africa’s lack of container capacity that has been strained by a considerable growth in container traffic.

A Transnet statement explained that the Ngqura container terminal will have the capacity to accommodate “Ultra-Mega” ships carrying 6 000 to 10 000 TEUs – 20-foot equivalent units, a measure used for capacity in container transport. It will be able to handle more than 100 container moves per ship working hour, with sufficient stack and berth capacity to cater for future growth up to 2-million TEUs. The terminal also boasts good inland connectivity for import and export traffic through road and rail. 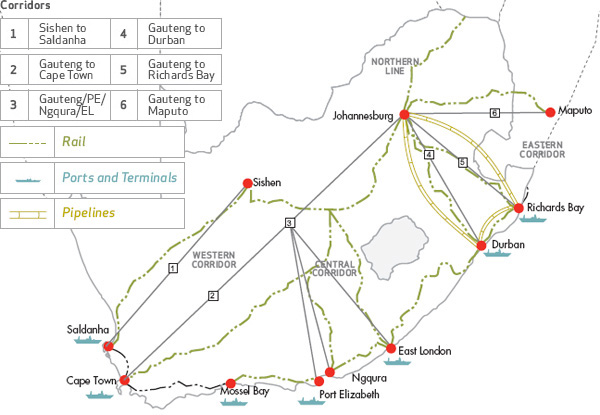 South Africa’s freight transport system. Sishen is a massive iron-ore mine in the Northern Cape, while City Deep in Johannesburg is the country’s only inland terminal. The port of Maputo is in the neighbouring country of Mozambique. (Image: Transnet)

Transnet has to date invested more than R10 billion (US$1.36-billion) to develop the state-of-the-art port and associated infrastructure. This includes a world class two-berth container terminal (and a further two berths under construction), a two-berth multipurpose terminal and a one-berth liquid bulk terminal.

The new port is also a safer alternative for ships wanting to avoid the Somalia coast, which has recently been plagued by pirates.

It could also serve as a “feeder” or “loading centre” for other destinations. The container node would function as a hub where large freight ships could unload their cargo for further distribution by road, sea or rail to other destinations in Africa.

The port is considered the most modern harbour in Africa. Although sub-Saharan Africa has a number of smaller ports, these are only suitable for medium-sized ships. It will not only boost the economy of the Eastern Cape; it is also an important development for trade in South Africa and the rest of Africa as a whole.

Rob Jeffrey, a director and senior economist at Econometrix, said that the promotion of industrial development at the Coega Industrial Development Zone would have a considerable impact on the underdeveloped Eastern Cape. It is likely to boost the gross regional product of the province and significantly increase growth in the Nelson Mandela Metro area, the broader municipality into which Port Elizabeth falls.

“This is substantial for such a relatively underdeveloped area, which is currently heavily reliant on the motor industry,” Jeffrey said.

He added that the development could also lead to a permanent increase in skills in the economy, particularly in local communities.

“It would affect a substantial number of people faced with few alternatives in a province with an extremely high unemployment rate, which has been measured in excess of 25%. The unemployment rate in adjacent Greater Motherwell has been placed at over 30%.” Motherwell is a sprawling urban settlement outside Port Elizabeth that also forms part of the Nelson Mandela Metro.

The port development will also directly create employment in the region. Transnet Port Terminals said in a statement that R4-billion (US$490-million) invested by 2002 created employment for 50 627 people – the equivalent of 12.6 jobs per R1-million (US$123 000) invested.

The port development also holds positive secondary benefits for other product groups such as agriculture, fishing, construction, transport (including storage), financial and business services, electricity and gas as well as wholesale and retail business.

Jeffrey pointed out that Coega and its port is ideally located to kick-start local and regional economic development of the area. He explained that some of the planned projects within the Coega development are capital-intensive and technologically advanced. This will result in an inflow of skilled people to the province and substantial education, training, upgrading of skills and development of small businesses.

“This will contribute to population growth and wealth generation, the benefits of which flows down into the less skilled population,” he said. The developments will also cause an increase in purchasing power, as the average remuneration per worker of such large projects is generally higher than the region’s average.

He cites Richards Bay as an example of the Coega’s potential impact in the region in years to come. Richards Bay evolved over a period of 30 years from a small fishing village into one of South Africa’s premier industrial districts. Today, together with the nearby town of Empangeni, it has a total population exceeding 50 000. The area has over 5 000 businesses, is the third most important region in KwaZulu-Natal and has had an economic growth rate higher than the average for the country and the province.

“This gives an indication of the type of expansion that can take place once the initial key industries are in place and act as a nucleus or a magnet, which can attract other upstream and downstream industries,” Jeffrey said.

Transnet has also announced that the deep-water port is expecting the delivery of one of its three new tugboats in mid-October this year. Currently, it is undergoing sea trials in the Port of Durban. An additional two new tugboats will also be delivered in April and May next year. Each tugboat has an approximate cost of R120-million, and capable of a 70-ton bollard pull. They are regarded as the most powerful harbour tugs in South Africa.

Rail operations at the new port have also received a stamp of approval. In September, Transnet Freight Rail (TFR) ran a test train on the Ngqura main line, and was declared safe for operations.

According to a statement from TFR, this is an important step in preparation for the planned commercial launch of the new port and its container terminal this month.

TFR is still confident that all its operations are on target for the completion of the Ngqura rail terminal, marshalling yard, and main line construction to the hinterland. There are currently four operational lines in the marshalling yard and the remaining five should be available by March next year. The new marshalling yard infrastructure can accommodate up to six trains daily per direction, and the hinterland will have a design capacity of two trains per day. The hinterland capacity will be increased as volumes increase, depending on financial and business viability.

The rail route will connect the new port to the City Deep rail terminal in Johannesburg in Gauteng province via Beaconsfield in the Northern Cape. Transnet has refurbished 400 container wagons and will utilise its 7E locomotive fleet for traffic on the line, which has a designed capacity of six trains per day, each with 50 wagons.