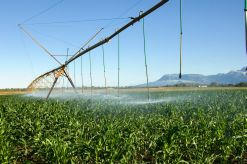 The Nepad Business Foundation promotes investment in the agriculture sector. There is a renewed drive among African leaders who increasingly see agriculture as a means to uplift incomes and promote economic development.
(Image: MediaClubSouthAfrica.com. For more free images visit the image library) 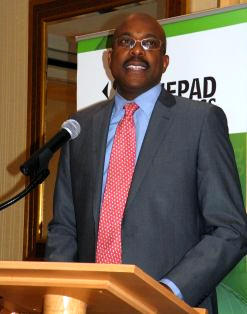 Miller Matola, CEO of Brand South Africa, said South Africa must leverage its competitive advantage, be it the depth of our financial markets, regulation of the stock exchange, or our sound financial services sector.
(Image: Wilma den Hartigh)

Doing business in Africa, intra-regional investment and perceptions of South Africa and the continent came under the spotlight at the recent Nedbank-Nepad Business Forum, a quarterly event for industry and business leaders to discuss emerging and long-term business perspectives on the continent.

The forum is an initiative of the New Partnership for Africa’s Development (Nepad) Business Foundation (NBF), and Nedbank. The objective of the NBF is to promote sustainable economic and social development on the continent.

Part of its mandate is to further the Nepad goals, which are to alleviate poverty, halt the marginalisation of Africa in the globalisation process, and fully integrate Africa into the global economy.

This includes reducing the risk profile of doing business in Africa; creating conditions that are conducive for investment, high economic growth and sustainable development; to increase Africa’s competitiveness in the world economy; and to grow investment on the continent to ensure social and economic development.

According to the October 2012 Nedbank-Nepad Business Forum report, seven of the 10 fastest growing economies are in Africa.

While the US and Europe are experiencing slowing growth rates, the continent is performing well and offering better returns for investors.

Investing in Africa is important for South Africa, as the success of the economy depends on regional and continental economic dynamics.

Terence Sibiya, executive head for coverage and origination at Nedbank, said there is a major opportunity for business in Africa. This includes a growing consumer base that has sophisticated demands due to urbanisation and improvements in disposable income.

“There are 200-million new consumers that are to be added to the African basket by 2015,” Sibiya said.

The report notes that politically Africa is also in a better position than it was three decades ago on issues of democracy, governance and the rule of law.

“Our banking system is ranked among the best in the world,” Sibiya said, adding that Nedbank wants to build capacity, expertise and skills in the area of banking in other countries on the continent to stabilise financial services in the region.

Speaking at the event, Miller Matola, CEO of Brand South Africa, said integration on the continent is important to create bigger markets, and the establishment of a free trade area for Africa is a step in the right direction.

“South Africa must leverage its competitive advantage, be it the depth of our financial markets, regulation of the stock exchange, or our sound financial services sector,” Matola said.

For the third consecutive year, the regulation of South Africa’s securities exchanges was rated first out of 144 countries included in the World Economic Forum Global Competitiveness Survey.

The survey also ranked the country first out of 144 countries in relation to auditing and reporting standards and the effectiveness of corporate boards.

Lynette Chen, CEO of the NBF, said economic development at local level is one of South Africa’s strengths.

“One of our best competitive advantages is our BEE policy, empowering local communities and supporting local procurement,” Chen said.

She said South Africa should leverage these positives when doing business with other countries in Africa.

According to the NBF’s chairperson, Stanley Subramoney, Africa has the right combination of factors to exceed in an increasingly volatile global economy.

The continent, however, faces challenges such as poverty, rising unemployment, lack of formal rules guiding investment practice and a lack of strong financial markets.

Matola said it is important for corporates to recognise existing issues on the continent such as inequality, the skills gap and poverty, and address issues of economic transformation. “Recognition of the social priorities of the countries you operate in is important.

“Businesses that position themselves there [in Africa] must embrace values such as ubuntu – we can’t exist without the rest of the continent succeeding,” he said.

The Nedbank-NBF report says that investing on the continent requires unique approaches per region and country, as some countries exhibit extraordinary growth while other show less growth, usually as a result of varying socio-political circumstances.

The manner in which governments and corporates are perceived, behave and implement their strategies largely depends on their image, credibility, transparency and trustworthiness. Such perceptions can either grow or limit investment.

Speakers and business leaders in attendance at the forum pointed out that while the continent has numerous external investment partners, there is fewer Africa to Africa investment and trade in comparison with other regions.

Matola spoke about the ways in which South Africa can leverage its competitive advantage, build a positive nation brand and differentiate the country, but at the same time contribute to building the continent’s reputation.

“Branding isn’t just about building South Africa’s reputation – it is closely linked with perceptions of the continent,” Matola said. “The negatives that apply to one country are inadvertently carried over to other countries.”

Subramoney pointed out that it is important for South Africa and the continent to deal with issues surrounding continental branding.

“We have a phenomenal country,” he said, but added that there are both benefits and disadvantages to continental branding. “This is why it is important to position the continent.”

Sibiya added that it is important for investors to understand the continent and its diverse nature and offerings.

Improving perceptions of the continent

“We need to change perceptions for the better,” he said. “What matters is our contribution to sustainability, food security, poverty and global governance, and how we get involved in these issues will add or subtract to our stature.”

He said that South Africa, which is considered a middle-income country, needs to compete in the area of brands, be it South African wines or other areas where South Africa excels.

“Our brands are among the strongest in the world,” he said.