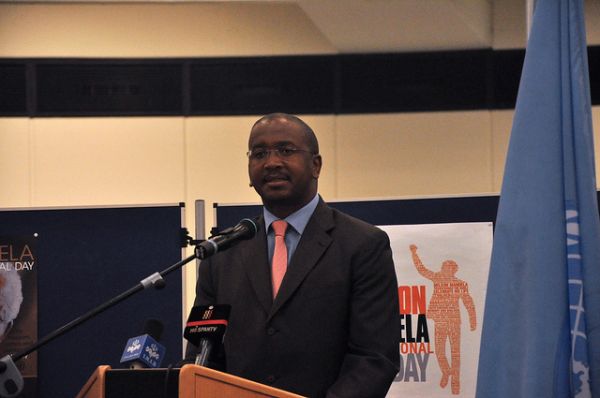 Nuclear and the industries that gow from it will be a source of highly skilled well paid jobs Xolisa Mabhongo believes. (Image credit: UNIS)

In 1994 the future of this facility – where the apartheid government stockpiled its military nuclear arsenal – was in doubt. Keeping it open was a good decision, says Mabhongo. “We could show that there were spinoffs from the industry, like nuclear medicine. That year the business earned R10-million rand in forex; last year it was a billion.”

South Africa is one of the top two countries when it comes to exporting nuclear isotopes used in medicine, especially to treat cancers. Beyond the  discovery of new isotopes for medicine, research at Pelindaba saved the export fruit industry. “We use isotopes to treat pests that are resistant to eradication. The export fruit industry in the Western Cape would have been decimated by the Mediterranean fruit fly if it was not for techniques developed here.”

We have got to keep and further develop this nuclear expertise, Mabhongo says, his voice rising passionately. We can continue to dream of becoming a high income country, but if we do not start providing highly skilled opportunities, as there are in the nuclear industry, we will not create those kinds of jobs.

“Beyond the obvious, stable power supply, the new nuclear build programme will go a long way to solving several pressing challenges South Africa faces. In the long term, it will have the effect of raising living standards for the vast majority of the population.”

Nuclear power will be a part of South Africa’s future energy mix. But as plans are put in place to move away from dirty and harmful carbon dioxide emitting coal power plants there is one truth that may throw a spanner in the works: the country is not producing enough science, technology and engineering graduates, and the scientists and engineers with nuclear experience are approaching retirement.

“Globally there is a shortage of skills; for the new build it is something we are cognisant of. We are going to need to produce a lot of artisans as well. As Necsa, on a day-to-day basis we collaborate with five universities, organisations that are already producing nuclear engineers and nuclear science graduates.”

Mabhongo says the corporation has not spent enough time telling the country about the enhanced skills development that Necsa runs parallel to the planning for the next generation of nuclear plants. The lifetime of the new generation of plants is 60 years, so Necsa – or Eskom, it has not been decided who will run these new plants – will need an army of maintenance workers, engineers, technician and scientists.

By 2020, many of the country’s coal powered plants will be decommissioned as they reach the end of their lives. By the time South Africa’s next generation of nuclear plants come online, its only commercial nuclear facility, Koeberg, will be six years past its expected life. In operation since 1984, the reactor is designed to have a productive life of 40 years but the operational knowledge gained and the need for the 13,668 GWh produced by its two turbines means the plant’s useful life will be extended to 50 years.

Mabhongo explains that it is now common practice worldwide to choose life extension rather than mothballing plants. Utilities in France, Sweden, South Korea and Switzerland have chosen to extend the lives of their plants. The knowledge gained through operations means the lifetime of Koeberg can be extended safely and it will remain safe for purpose.

A time will come, he emphasizes, when it will be uneconomic to continue operating Koeberg given the need for extra maintenance work or if it becomes unsafe. One of those maintenance problems is the emotional issue of nuclear waste.

Waste, a by-product of Koeberg power generation, is all stored on site in the Western Cape; it remains the nightmare for most people. Even if not used to create bombs, it is a radioactive legacy of deadly waste that the world spends a fortune to contain.

“We can account for every ounce of waste created by Koeberg in the life of the plant, but waste and how to deal with it is a concern for the nuclear industry worldwide. In the long run we need to look for permanent solutions. There is advanced research being done on reactors that use the waste, creating no waste. For example, thorium reactors use waste to create energy. We will reach a stage where we have a permanent solution to the issue of waste.”

The government, Necsa and Eskom say they have considered every contingency regarding South Africa’s energy future. At a recent debate, Mabhongo was even asked if smaller modular reactors spread across the country were not a better option than a fewer large reactors.

His answer today is considered and measured: “We are talking about re-industrialising South Africa, about creating jobs. Smaller plants are not realistic in terms of South Africa’s energy needs. We are in summer and we are having blackouts. Let us assume a positive future where we have economic growth, we will need a huge base load source of energy. Without large stable sources of electricity, companies are not going to invest in South Africa in a big way.”

It is Mabhongo’s job to celebrate and support the success of South Africa’s nuclear industry and he sounds sincere as he speaks. He freely admits that even now, 20 years after the end of South Africa’s military nuclear programme, the industry still suffers from misperceptions and is shrouded in mystery. But that is changing, he says.

“We have very established processes. Take our headquarters here, when it was built it was very far from any population centres. That has changed over the years, and now we have quarterly meetings with the community. It would be the same with new plants; at every step of the process there will be community engagement.”