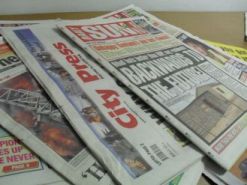 City Press and Daily Sun are some of
the newspapers produced by Media24,
a Naspers subsidiary.
(Image: Bongani Nkosi)

In a deal worth $342-million (R2.5-billion), Naspers bought 91% of BuscaPé’s share capital. The acquisition will be funded from available resources, Naspers said.

BuscaPé, with headquarters in Sao Paulo, is Latin America’s top e-commerce services provider. “Its various properties enable consumers to make informed purchase decisions and transact on the internet,” affirmed Naspers in a statement.

E-commerce, short for electronic commerce, is the trading of goods and provision services via the internet, especially on websites whose sole business is advertising other businesses and products.

BuscaPé is the exclusive provider of internet shopping solutions for more than 100 portals and websites in Latin America. It also provides services to leading companies Microsoft, Globo and Abril, with more than 10-million products and 320 000 online and offline stores.

“BuscaPé gives us a fast-growing business in line with our e-commerce focus,” Antonie Roux, head of internet at Naspers, said. “It’s a diversified internet platform [with] a whole spectrum of business models within the e-commerce value chain across core Latin American markets.”

Naspers already owns significant shares in two Brazilian groups. It owns 30% of media and publishing corporate Grupo Abril, and 54 % of Compera nTime, one of the largest mobile value-added services companies in that country. Compera nTime is estimated to have an excess of 25-million users across Brazil.

E-commerce is one of the most prospective areas of the internet, Naspers said in a statement. Through the acquisition of e-commerce business units Allegro and Ricardo groups in Eastern Europe, the Johannesburg Stock Exchange-listed corporate has built considerable knowledge in this field.

“Given Naspers’s extensive experience in the internet, they can help us grow to the next level. Some future collaboration between Allegro and BuscaPé is likely,” BuscaPé CEO Romero Rodrigues said.

Naspers said Latin America is of particular interest to it, as it’s home to more than 550-million people. The group lists the continent’s “favourable demographics, rising disposable incomes, underleveraged consumers and a less-penetrated internet market” as providing a “good investment backdrop”.

“After investments in [Grupo] Abril and Compera nTime, Naspers has developed a good understanding of the fast-growing Brazilian market,” said Hein Brand, CEO of Naspers’s operations in Latin America. “BuscaPé is one of the few established players in the industry, and can grow further,” he added.

Naspers was founded by Die Nasionale Pers (The National Press) in 1915 in Cape Town and listed on the Johannesburg Stock Exchange (JSE) in September 1994. The conglomerate also has a listing on the London Stock Exchange.

It has transformed from a traditional print media player to dominating television and the internet. Naspers owns 85% of Media 24, a company responsible for a number of successful national and community newspapers and magazines in South Africa.

It owns broadband operator MWeb and MultiChoice Africa, which has more than two-million pay-television subscribers in Africa.

In addition to Brazil and Eastern Europe, Naspers has significant business interests in China, Russia, the Netherlands, India, Singapore, Thailand and other countries in sub-Saharan Africa.