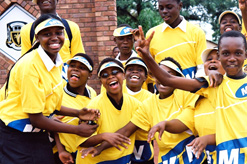 BEE is a government policy promoting
black ownership and control of enterprises
to rebalance apartheid’s severely skewed
effect on the economy.
(Image: MTN)

The deal, announced on Monday and set to be concluded in the first half of 2009, comes after South Africa’s second major mobile phone provider Vodacom implemented a R7.5-billion BEE deal in July 2008.

BEE is a government policy promoting black ownership and control of enterprises to rebalance apartheid’s severely skewed effect on the economy. Companies’ BEE status is determined by the Broad-Based Black Economic Empowerment Codes of Good Practice, which allocates a certain number of points according to ownership, control, social investment and other criteria.

MTN will launch a public offer open to all African, coloured, Indian and Chinese South Africans – classified as “black people” according to BEE legislation. These will include employees and black South African non-executive directors of the company.

Until now most of MTN’s BEE equity ownership points come from the Alpine Trust, which holds 13.1% of MTN though a company known as Newshelf 664. Alpine’s beneficiaries are eligible MTN employees, and the trust holds ordinary MTN shares on behalf of Newshelf 664.

This structure is scheduled to unwind on 22 December, with the dividend of MTN shares will be declared to Alpine beneficiaries.  MTN will acquire Newshelf for a nominal value.

MTN will then settle or acquire all outstanding funding obligations in Newshelf for R400-million in cash and by issuing some 213.9-million shares representing roughly 11.5% of its issued share capital. MTN will effectively acquire 13,1% of its shares held through Newshelf in exchange for the issue of 11,5% of its capital. The company will use most of this effective discount to facilitate its new BEE transaction.

“The MTN Group as a South African-based multinational telecommunications company listed on the JSE has been and remains committed to the principles of BEE,” said company chair Cyril Ramaphosa.

“We believe these proposals are important for the long-term progress of MTN and will facilitate sustained and meaningful BEE participation in the company.”

MTN expects the transaction will make up 5% to 6% of its issued share capital. South Africa’s Public Investment Corporation has undertaken to make up to 6% of MTN’s ordinary share capital in its equity portfolio available for the deal. Based on the codes of good practice, this translates to about 25% to 30% of MTN’s South African operations. The ultimate size of the BEE deal may will depend on market conditions and the extent of reinvestment by Alpine beneficiaries.

Beneficiaries will have to make an equity investment to take part in the deal, with MTN helping to raise finance, amounting to less than 0.75% of its market capitalisation. The transaction will be designed to provide long-term, sustainable benefits to participants and will have a duration of six years, MTN said.

The company will also establish an employee share ownership plan to benefit eligible employees who are not part of its current incentive schemes.

MTN plans to finalise the BEE Transaction in the first half of 2009, subject to market conditions. Full details of the BEE transaction will be communicated to shareholders thereafter for approval.