The forceful thrust of South African cellphone network operator MTN into the global telecommunications arena has not only taken its competitors by surprise, but it has also proved that calculated risks do pay off. Following a slow start since its inception in 1994, MTN took off rapidly in 2002 with remarkable expansion into Africa and the Middle East. Bolstered by a new vision-driven Chief Executive Officer, Phutuma Nhleko, the network operator went into over-drive to not only reposition itself, but to set new trends. 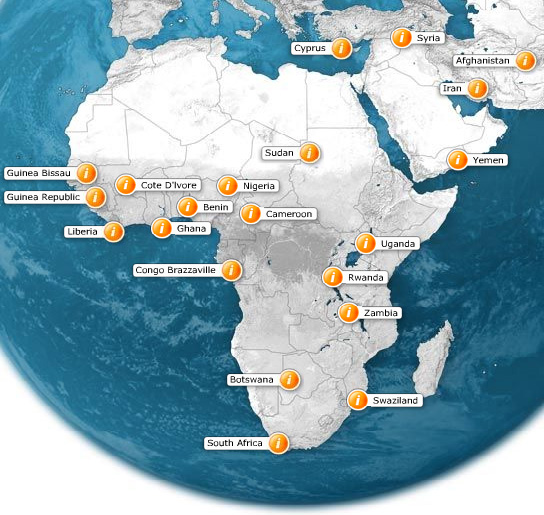 The MTN group has operations in 21 countries in Africa and the Middle East.

Over the past six years the company’s share price has risen more than ten times in value since Nhleko was appointed. MTN is now worth an estimated R250-billion ($US32-billion), making it the sixth-biggest company listed on the Johannesburg Stock Exchange and putting it among the 10 largest mobile phone operators in the world.

Setting up shop in developing countries has paid off in monetary terms for the company. For the year ending 31 December 2007, the group reported operating earnings of R31,8-billion ($4.08-billion) on revenue of R73, 1-billion ($9.34-billion), an operating margin of close to 45%.

Fending off the bigger players

Besides obtaining operating licenses in the different global regions, the group is also keen on making acquisitions in countries that it hopes to expand into. Nhleko’s acquisition plans include buying assets in Southeast Asia and Central America. Analysts are predicting that the company will also target Pakistan and India – both countries have low telephone penetration.

The network’s main objective at the moment is to continue cementing its position as a global telecommunications player, in a bid to prevent the company from being swallowed up by bigger players. Speaking to Financial Mail, Nhleko said, “We do not have a ‘for sale’ sign up. But, being a publicly listed company, we can’t say if someone approached the company, the shareholders would necessarily be in agreement with management to sell or not to sell. Our job is to manage the company and grow the values until the shareholders tell us differently.”

MTN’s success has attracted the attention of other international telecommunication companies in the industry. China Mobile, the world’s largest operator by subscriber number (it has an estimated 400 million users) is believed to be in serious talks with MTN. The talks allegedly started 18 months ago although both parties have been silent on the topic.

The UK’s Vodafone, which currently holds 50% of Vodacom (MTN’s biggest competitor in South Africa), is believed to be cajoling the network into allowing it to buy a stake in its operations outside of South Africa. MTN has, however, denied this.

As at 31 March 2006, MTN recorded more than 28 million subscribers across its operations, including those of the newly acquired Investcom LLC. In the last quarter of 2006, the network launched commercial operations in Iran, following the successful purchase of a 49% shareholding in Irancell. Growth has been so phenomenal that it is estimated that by the end of this year MTN will have more subscribers in Iran than South Africa.

Since operations started in that country 18 months ago, the network operator now has nine million users. South Africa currently has 14,8-million users. With rapid expansion though comes the challenge to continually provide the infrastructure for an efficient service. To this end, MTN intends spending more than R30-billion this year alone on expanding its infrastructure and improving the quality of its coverage.

The group has of late come under fire from regulatory bodies, especially in Nigeria, to improve the quality of its services or pay the fines. Nigeria is one of the network’s biggest markets. MTN Nigeria, one of four cell phone networks in the West African country, has been operating since 2001.

During the period under review, MTN Nigeria aggressively focused on subscriber growth, supported by rapid network roll out amid keen competition in the market. As a result, the company significantly increased its subscriber base from 5,6 million to 8,4 million currently.

In February 2008, in a bid to empower Nigerians, MTN South Africa reduced its stake in MTN Nigeria to 76,08%. Nigerian individuals and key institutions acquired a 9,45% interest in MTN Nigeria from MTN. The company said that it had sold 5,96% in MTN Nigeria as part of a US $594,5-million (R4.632-billion) private placement.

Phutuma Nhleko first became involved with MTN by way of Worldwide Africa’s investment in Johnnic (now Avusa). Nhleko, along with top businessman Wiseman Nkuhlu, founded Worldwide in 1994 as one of the first black empowerment investment companies in South Africa. The company, of which Nhleko still remains a major shareholder, invests in various energy and technology companies across sub-Saharan Africa. Nhleko is described by industry insiders as driven and determined.

Colleagues say he contemplates everything deeply and methodically but is not afraid to take risks once he’s weighed all his options and is certain of the move he is about to make. His deal-making skills were honed at Standard Bank, where he worked from 1990 until he started his own company in 1994 but his background is in engineering. He studied engineering at the University of Ohio in the US and also has an MBA from the University of Atlanta. Despite having achieved phenomenal success for MTN, Nhleko is reluctant to renew his contract when it expires in 2010, saying that by then the company will need someone younger and fresher with new ideas to take the company forward.

Nhleko is not a one-man island at the company and works closely with a core group of seven: