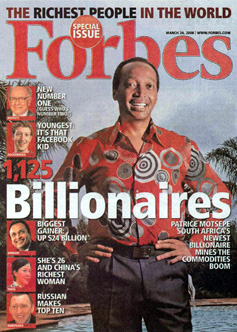 Hands on hips, wearing a relaxed smile and somewhat psychedelic shirt, South African mining magnate Patrice Motsepe is on the cover of a special issue of Forbes magazine listing the world’s 1 125 dollar billionaires.

Motsepe is the first black South African billionaire to make the prestigious Forbes list, his net worth of US$2.4-billion (R18.6-billion) giving him a rank of 503. He joins fellow South Africans Nicky Oppenheimer and Johann Rupert, ranked at 173 and 284 respectively.

Oppenheimer and family, owners of the De Beers mining group, have a net worth of $5.7-billion (R45.8-billion). Rupert and family have a fortune of $3.8-billion (R30.5-billion) from their publicly traded Swiss luxury group Richemont, owners of Cartier, Chloe, Dunhill and other premium brands.

Motsepe is the executive chair of African Rainbow Minerals (ARM), with a large stake in the company. ARM was set up in 2004 when Motsepe, in collaboration with the Harmony Gold Mining Company, took over Avmin. A diversified mining company, ARM has interests in ferrous and platinum group metals, nickel, coal, copper, cobalt and other base metals.

A total of seven Africans are on the list, including three Egyptians and a Nigerian. The latter, industrialist Aliko Dangote, joins Motsepe as the first black Africans to make it into the Forbes billionaires’ club.

New at the top of the list is Warren Buffet of Berkshire Hathaway, with a net worth of $62-billion (R769-billion). Mexican telecoms mogul Carlos Slim Helu is second, with $60-billion (R745-billion), and Microsoft’s Bill Gates, who held the top spot for 13 years, falling to third, with a fortune of $58-billion (R720-billion). This year showed increasing dominance of emerging economies, with the top 10 including four billionaires from India, and one each from Russia and Mexico.

The prince of mines

Only 46 years old, Motsepe was born in Soweto in the south of Johannesburg. His family are Tswana royalty – Forbes‘s profile of him is titled The Prince of Mines and includes the comment, “He is, in fact, a prince” – while one of his great-grandmothers came from Scotland.

Around the time of Motsepe’s birth the anti-apartheid activities of his father, Augustine Motsepe, led to the family being banished to the dusty rural area of Hammanskraal, north of Pretoria. There Augustine opened a store and a beer hall. The story goes that the younger Motsepe began his business career at the age of six, helping out his father from behind the counter at the store. “Whenever my father made a profit, he always ploughed it back into the store,” Motsepe told Forbes.

Education was important to his parents, who managed to get their seven children into an Afrikaans-language Catholic boarding school reserved for coloured children. From there Motsepe went on to the University of Swaziland and then the University of the Witwatersrand in Johannesburg, South Africa, graduating with a law degree.

In 1988 he joined Bowman Gilfillan, one of South Africa’s largest corporate law firms, and in 1993 became the firm’s first black partner. “Energetic and affable, Motsepe never wore his race on his sleeve,” Forbes quotes Bowman partner and longtime Motsepe lawyer and confidant Neil Rissik as saying.

Over the past year ARM’s share price has rocketed from $12 to $24, pushing the value of Motsepe’s net worth to $2.4-billion. Motsepe has a 42% stake in ARM, as well as a 5.5% stake worth $295-million in Sanlam, a publicly traded financial services company based in Cape Town.

“By billionaire standards Motsepe has a modest lifestyle,” Forbes says. “His three sons attend prestigious private schools, but he has only one home, in the affluent Johannesburg suburb of Bryanston, and no yacht or plane. His one indulgence is to own the Mamelodi Sundowns, a soccer team.”