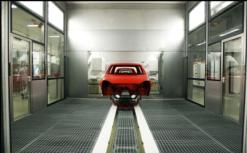 The Department of Trade and Industry, along with key representatives from South Africa’s motor industry, including component manufacturers, trade unions and members of the National Association of Automobile Manufacturers of South Africa, are satisfied with the final details of the work-in-progress Automotive Industry Programme (AIP). This decision paves the way for submission of the document for Cabinet’s approval.

Full details of the scheme have yet to be released. Minister of Trade and Industry Mandisi Mpahlwa has given his assurance that it will be fully explained once Cabinet has given it the green light.

The AIP will replace the current Motor Industry Development Programme, which was implemented in 1995 with a two-part strategy, one for car and light commercial vehicles, and one for the medium and heavy commercial vehicles. The current programme is due to expire in 2012.

The key objective of these two schemes was to shape the future of the South African motor and associated industries. It would achieve this by helping the local motor industry reach international competitiveness while remaining affordable at home, boosting growth in the motor component industry, especially with regard to exports, as well as stabilising employment levels and creating a better balance between the industry’s foreign exchange earnings and expenditure.

The new programme, which for the moment will focus on the car and light commercial vehicle sector, has been under intense development for more than a year.

The AIP provides a development strategy up to 2020, in line with government’s National Industrial Policy Framework target of doubling annual vehicle production to 1.2-million units by 2020. The scheme will continue the task of stimulating growth of the local motor vehicle and vehicle component industries, and will also address the crucial issues of employment and increased investment.

The AIP will give manufacturers who produce more than 50 000 units annually, the opportunity to import a percentage of their components without having to pay duties. It will offer incentives for value-added production, and an allowance scheme to give companies more capacity to invest in skills development and training, research and development, and localisation.

An important sector of the economy

The vehicle and component manufacturing sectors are among the most important in South Africa’s economy, providing jobs for thousands. Higher interest rates domestically have slowed new vehicle sales, but a number of major export deals have been secured by major local manufacturers, not only boosting foreign exchange flow into the country but proving that South Africa’s car manufacturing standards are on a par with the rest of the world.

Earlier in 2008, Volkswagen South Africa, based in the Eastern Cape, one of the country’s poorest provinces, was awarded a contract worth R12-billion ($1.5-billion) to supply the entire Volkswagen group worldwide with diesel particulate filters over a period of five years. The deal is said to be one of the biggest export contracts for a single car part.

In 2008, Toyota South Africa will export 147 000 of the total 220 000 units manufactured at its Durban-based plant to Europe and other parts of Africa. This will account for 60% of South Africa’s total vehicle exports for the year. The potential value of the exports, including components, is some R20-billion ($2.5-billion), almost 1% of South Africa’s GDP. Toyota South Africa spent five years and several billions to upgrade the plant in order to meet the manufacturing standards demanded by the global market.

The Ford Motor Company, meanwhile, announced in February 2008 that it was planning to invest R1.5-billion ($190-million) into the South African motor industry, focusing specifically on the company’s vehicle assembly plant in Pretoria and engine manufacturing facility in Port Elizabeth. This will give the two plants the capacity to produce Ford’s next-generation range of small pickup trucks and turbo-charged Puma diesel engines. The investment is expected to enhance South Africa’s standing as a quality worldwide export base for Ford.

Government has thrown its weight behind the South African motor industry with a number of support initiatives designed to stimulate development of the sector and attract more foreign investment. One of these is the Automotive Supplier Park, an initiative of the Gauteng government’s Blue IQ, which works to develop economic infrastructure for large-scale projects.

The Automotive Supplier Park, located in Pretoria, contributes to the sustainable growth of the automotive industry in Gauteng and South Africa by improving its competitiveness locally and internationally. By bringing manufacturers and suppliers into one location and offering them state-of-the-art infrastructure, the supply chain is streamlined and productivity is optimised.

The initiative celebrated its fifth anniversary in February 2008. A second supplier park is on the cards for development.

Another Blue IQ-driven initiative is the Automotive Industry Development Centre, which provides the local vehicle manufacturing sector with critical support systems such as advanced facilities for design testing and research and development, as well as skills development and training through industry-specific courses.